Some 927 whale sightings were reported by Alaska cruise lines this year.

The Encore was responsible for nearly a third of them — the Norwegian Cruise Line vessel reported 280 sightings. The Queen Elizabeth submitted 192, and the Nieuw Amsterdam tallied 76.

The reports were all made through the Whale Alert Alaska program. It’s an app that launched in 2012 to help ships avoid whale strikes. NOAA and Glacier Bay National Park expanded it for use in Southeast Alaska in 2016. The app can be used by mariners or pilots.

Carley Lowe is one of the NOAA biologists running the program.

“We have sort of a live map that shows where all the whales are, and that way people can look at the map before they take off to see what the sightings were around their area, and hopefully, try to avoid some of the whales in the area that they’re going through,” Lowe said.

The app replaces a previous program where Cruise Line Agencies of Alaska would send out maps of recent whale sightings once a week through email.

“We’re trying to just really make it as easy as possible for people to use, and that way, it’s not burdensome, and it’s just seamless into their other programs,” Lowe said.

Lowe said this was the first year that NOAA gave out awards for the most reports to come from a vessel.

“And we’re hoping to continue with that program, just some friendly competition,” she said.

The Encore’s first navigation officer, Bodgen Ciordas, also received an award for his specific reports, as did Lauren Peach, a lookout onboard the Queen Elizabeth. 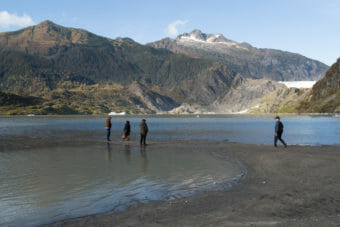 In new lawsuit, Alaska attempts to claim portions of Mendenhall Lake and River

The lake is currently under the jurisdiction of the U.S. Forest Service, and a successful lawsuit could bring significant changes. For example, motorboats and (in winter) snowmachines are barred from the lake.