Leaders in the Western Alaska community of Kipnuk say the principal of nearly a decade there bullied Native school staff members, put residents in jeopardy by ignoring COVID-19 restrictions and oversaw a decline in education quality. That’s why in October, according to documents obtained through a public records request, they voted to banish her.

School officials and tribal leaders involved in the banishment order and subsequent search by tribal police officers at the Chief Paul Memorial School at the end of last month have largely declined to comment on what happened beyond brief written statements. But in documents submitted to the Alaska Department of Public Safety and obtained by the Anchorage Daily News, new details emerged about longstanding tensions between community members and principal LaDorothy Lightfoot, who began work in Kipnuk in 2013.

Lightfoot did not responded to multiple emails and phone messages seeking comment.

“We are kindly encouraging you to leave your position as Kipnuk Site-Administrator at Chief Paul Memorial School. We, the Native Village of Kipnuk, have received many calls from the local Kipnuk Tribal members about you,” said the banishment order, signed in early October. “You have neglected important parts of being a leader in Kipnuk. The relationship with (a) variety of people was not positive.”

According to the document, tribal leaders voted 6-0 on Oct. 4 to permanently expel Lightfoot from the community of around 700 mostly Yup’ik residents near the mouth of the Kuskokwim River on the Bering Sea coast.

After the vote, the problems escalated, with a formal resolution to keep kids out of school. It came to a head in the weekend before Halloween, when tribal officials signed a document authorizing a search of school buildings and homes. By Saturday, Alaska State Troopers were on the ground in Kipnuk, and the principal, along with more school employees, were flown to Bethel on planes chartered by the Lower Kuskokwim School District.

Now, instruction for the school’s roughly 200 students is happening online for the foreseeable future, with teachers staying temporarily in Bethel while conducting lessons online for students almost a hundred miles away back in Kipnuk.

Banishment has long been a way for Alaska Native communities to protect collective well-being in places where state and federal law enforcement barely exist, sending away tribal members and outsiders whom local leaders deem to pose significant threat.

On Friday, Tribal Administrator Nick Slim said the Kipnuk Traditional Council was not ready to comment on the situation.

Along with its banishment order, the traditional council included a list of problems during Lightfoot’s tenure. Many of the complaints relate to how the school was run, including claims that in her leadership role she neglected traditional language instruction and values, communicated poorly with local leaders, violated COVID-19 health measures, showed disrespect toward indigenous school staff, and mishandled extracurricular programming.

“More of the Kipnuk language is being lost since she arrived here,” the council wrote.

According to the complaint, more local students were opting to leave the community for better educational opportunities elsewhere.

“The school and leadership is not promoting and supporting student performance and school effectiveness,” according to the Kipnuk Traditional Council.

The banishment order mentions disrespectful treatment of residents, including those working at the school, though does not go into detail on specific instances.

“Treatment of Native faculty and staff by LaDorothy is very poor. She loves to humiliate Native staff,” according to the complaint.

“She is known to bully people in the past,” said another document from the council included along with the banishment order.

Another major flashpoint related to COVID. The Kipnuk Elders Committee sent a letter to legislators, state education officials and the Yukon-Kuskokwim Health Corp. in September 2021, angry that students were brought back to school in-person to take standardized tests at a time when lockdown measures and firm prohibitions on gathering were in place to prevent illness.

“The duty of safety and health of all students was ignored,” the elders wrote, noting that the local lockdown order barred gatherings at school, church or stores.

The letter notes that Kipnuk, like many communities across Alaska that fall, was seeing a surge in COVID cases driven by the Delta variant. Households do not have piped water or adequate sewage infrastructure, and already “families are having (a) hard time with it.”

“In total we lost seven local members since January 2021,” the elders wrote of the coronavirus. “The school authorities should know that COVID-19 spreads easily, and guidelines shouldn’t be ignored, especially for a village that doesn’t have running water and disinfectants available in their homes. The welfare of Kipnuk is more important than taking a test.”

“There is clearly (an) imbalance between the school and local authorities,” the letter said.

A week after the banishment order was signed, the traditional council held a public meeting on Oct. 12 with parents of students that culminated in a resolution ordering pupils “not to attend school until further notice,” with the exception of participating in athletic programs. According to a copy of Resolution 22-52, 32 parents supported the measure, none opposed.

The next day, state law enforcement officers arrived in Kipnuk to find the boardwalk from the airport into town blocked.

“Alaska State Troopers were able to deescalate the situation and travel to the school,” the Department of Public Safety wrote in a dispatch on Halloween. “Troopers met with the principal and school staff to determine what was happening. Troopers were able to determine that no crimes had been committed and worked with the school district to facilitate assisting those that wanted to leave the village in doing so. The principal along with other school staff chose to leave and were flown out of the village on two aircraft chartered by the school district. No threats were made towards Troopers or school district staff.”

The Lower Kuskokwim School District did not respond to detailed questions regarding the incident, allegations against Lightfoot, or when educators might go back to Kipnuk. Instead, Superintendent Kimberly Hankins pointed to the previously issued press release and offered a brief statement.

“The safety, health, and wellbeing of our students and staff is and always will be our primary priority. LKSD takes seriously and investigates specific community member complaints as thoroughly and expeditiously as possible. We have done so in all circumstances related to this school and staff, and all prior allegations have been reviewed and addressed,” Hankins wrote. “We are committed to maintaining an open line of communication with KTC to work together and towards a resolution.”

Hankins could not comment on whether Lightfoot would be returning to her position in Kipnuk, as the district is “not able to provide additional information about confidential personnel matters.”

No charges have been filed against anyone in connection with last weekend’s incident. 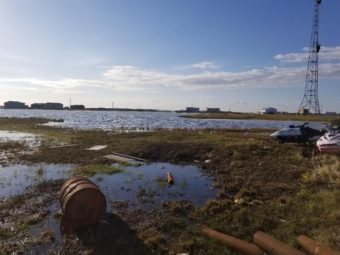 Village school closed after principal is banished from Kipnuk

Two weeks ago, the council sent a letter to all Kipnuk households prohibiting children in the village of around 700 people from attending school, citing concerns for students’ safety.