U.S. Rep. Mary Peltola took the stage at the Alaska Federation of Natives convention in Anchorage Thursday, pitching herself as a regular Alaskan who happens to be their congresswoman.

Her theme, and the theme of the conference, was the power of unity.

“This is what democracy is built on: Unity. Coming together. Compromising. Building consensus, building coalitions, working together. Seeing each other as humans,” she said. “Just all of the things that help us jell and work through our problems.”

Peltola has been a congresswoman for just 38 days, and she’s running for re-election. AFN is traditionally the largest convention in the state, and this was the keynote speech. This year, for the first time ever, delegates are hearing from a member of Congress who is, like them, an Alaska Native. To say it was a warm reception would be an understatement.

The crowd treated her like a rock star. They cheered at the mention of Peltola’s name and waved photos of her face that were made into hand fans.

“I’m uplifted in this moment because of you,” Peltola said. “After years of COVID and through economic and political storms, we’re together again, celebrating our unity. And I stand before you very humbled. And I’m only able to stand before you in this way because of our unity and because of the faith and hope and love and courage and wisdom in this room.”

Peltola mixed loftiness with down-to-Earth anecdotes about driving kids on the school run, texting with family members and fishing.

Emotional moments that weren’t on the agenda competed with the power of her speech.

Peltola, who frequently pays tribute to her Republican predecessor, invited the late Congressman Don Young’s family to the stage. His daughter Joni bestowed on her his signature accessory: His beaded Alaska flag bolo tie. He wore it for decades.

“It’s a symbol of being the congresswoman for all Alaska. So it’s kind of like passing the mantle,” said Joni Nelson, who made the tie for her father. “I felt it was a nice thing to do. The right thing to do.”

She and Young’s other daughter, Dawn Vallely, both said they support Peltola’s re-election and aren’t bothered that she’s a Democrat.

“Like my father, she’s focused on the needs of Alaska, and of Alaskans. And that’s the most important thing, regardless of party,” Vallely said.

When Peltola finished speaking but before she left the stage, one corner of the hall at the Dena’ina Center broke into song. The attendees traditionally sit according to region, and this corner was designated for Peltola’s home area, the Yukon-Kuskokwim Delta. The song was an Orthodox blessing, wishing her many years.

Then, from the Northwest region, a hymn in Inupiaq. One elder led the way, reading the verse from her cell phone screen. When they finished, a “Hallelujah” hymn broke out from the Interior section.

Peltola stood at the front of the stage, looking over the immense hall, her eyes brimming with tears. 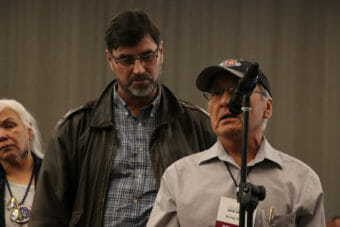 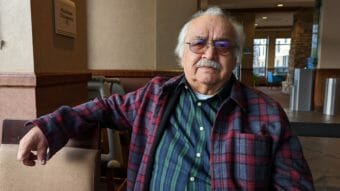 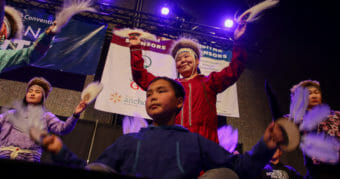