A new TV show debuts this week, centered on a daily newspaper in Alaska and the lives and work of its staff.

It’s called “Alaska Daily,” and while the newspaper itself is somewhat based on the Anchorage Daily News, with the show’s plot apparently focusing on many real-life themes familiar to Alaskans, the ADN’s editors are quick to point out that the show is fiction.

That said, the Daily News has been collaborating with ABC to create “Alaska Daily,” and the show came about after the ADN’s “Lawless” series on sexual violence and failures in Alaska’s criminal justice system, which went on to win a Pulitzer Prize.

The ADN’s lead reporter on the “Lawless” series, Kyle Hopkins, is an executive producer on the show, and Hopkins says the show’s creators have taken a keen interest in creating an honest portrayal of journalists and journalism in Alaska.

Hopkins says they even built a set of a newsroom that was very similar to that of the Anchorage Daily News.

Kyle Hopkins: There’s just like this building in Vancouver that used to be like a bank vault. And so you go down into this bunker, and there’s just this whole newsroom that looks, I mean, it looked a lot like the Daily News newsroom at the time. There was like an editor’s office, right? Where I literally, you know, because I was still working, I did actually do some work in that newsroom like in between takes.

Casey Grove: Wait, you did newspaper reporting work in the newsroom that was created for the TV show, but you were you were working for the real Anchorage Daily News, obviously.

Casey Grove: Well, I should probably back up. What is it about? What, I mean in in a nutshell, like, what is this whole show about?

Kyle Hopkins: I feel like the most important thing to communicate is it’s fiction, right? The director and writer of the show, the creator of the show, Tom McCarthy, he made the movie “Spotlight” in 2015, which was about an actual series of stories that the Boston Globe team wrote about the Catholic Church, right? And it was kind of retelling how those stories were reported and told. And this is not that. This is not telling how I or anyone else at the paper reported a specific story. You know, there’s commonalities with things that we report on. And there’s like, touchstones and stuff, but it’s fully fictional in the way that you know, you have “ER” or, I don’t know, like, some show about firefighters in the firehouse or whatever. It’s a fictional workplace drama that shares a lot in common with the Anchorage Daily News. And it’s meant to kind of be about how local news is made. I mean, you know how it is. The stories that we cover are, there’s times where you think, “Boy, you couldn’t make this up.” And so, I don’t know that this fiction is stranger than truth, it’s just different in this case.

Casey Grove: Well, for you, why make this show? Why be involved in this at all?

Kyle Hopkins: Well, I certainly did not expect to be. You know, I had been thinking about a couple of different types of projects. I was really interested in the future of Alaska, what does this place look like 50 years from now? I think we really should be thinking about that. But at the time that we were talking about doing a larger project, you know, it was around the time that Ashley Johnson-Barr was killed in Kotzebue. I had written a couple of stories about the police in Nome not following up on reports of sexual assault. And so we did a callout to readers saying, “Hey, would you be willing to talk to us or help us understand, you know, this issue of sexual violence in Alaska?” And the callout got many, many responses. We’ve heard from many, many people. And they would flag these really specific problems that seemed fixable.

And so that was appealing, this idea that, all right, there are things that are broken that seem fixable. So we did that project with ProPublica. And after the stories started to publish, I started getting all these inquiries about film and TV rights. And I’d gotten that a few times before and kind of never really paid attention to it. But this was, like, really, it just kept happening and happening. That was a little scary to me, because these themes are really delicate. And if anything gets made, my feeling at the time was like, probably nothing will ever get made. But if anything gets made, I want to make sure that whoever is in a position to make it is kind of the best possible folks to come and be doing that, right? At the time, I had a mentor at ProPublica. He’s like, “Well, you just kind of talk to people who know this world.” And so he put me in touch with people who then put me in touch with a few different creators, and one of them was Tom McCarthy. And we spoke I was, you know, like a lot of reporters, I was a big fan of “Spotlight.” It seemed like someone who really wanted to understand, or did understand, some of the nuances of reporting, because it’s like, they do all this boring stuff in that movie. They’re just like looking at paperwork. And they’re kind of doing what seems like pretty mundane reporting to get the big story.

And I was and I thought that was just a nice treatment. And so, you know, we talked and all the stories I’ve heard is like, lots of things get talked about, but nothing ever gets made. So I thought, “Well, that’s probably the last I’ll hear of that.” And then they filmed the pilot, and I was like, “Hmm, that seems like a big investment.” But then it still seemed like it wasn’t gonna happen. And then, just in the spring, it was like, “Hey, this is happening.” And it all kind of happened pretty quickly. It’s been kind of head-spinning.

Casey Grove: I have to ask the question. I mean, you flew away to go help work on the show and you came back. I don’t know if any of that work overlapped with the stars in the show, but did you ever get a chance to meet any of them? Like, Hilary Swank, or anybody else?

Kyle Hopkins: You know, I was there when the pilot was filmed, so I kind of met everybody during the pilot filming. And, you know, the show’s mostly filmed in Vancouver, and the show has been written in New York. And so, it was a lot of Zoom calls. And individual actors would often call, this has happened a lot, an actor would call, and they’ll just be like, “Hey, you know, if you’re doing, you’re working on this type of story, and you’re going into this type of interview, it’s the first time you’re interviewing this candidate, or it’s the, you know, it’s like this type of kind of sort of confrontational interview, right? Like, you know, how does that work?” So we got these long conversations about, “Well, this one time this happened,” or, “Here’s what I was thinking about or whatever.” So like, I talked to some of the cast members a lot, the ones who played the reporters. I met Hilary Swank. I met her, she’s got a cute little dog. She always has dogs with her.

Casey Grove: You know I’ve gotta ask about that. But it is super interesting that any of them would have called for advice, like almost like a reporter, a rookie reporter, would have called like, “Hey, well, how do I deal with this situation?” Because so much of that is like your demeanor and how you approach the subject.

Kyle Hopkins: Yeah, no, they take it really seriously. The cast, I think, I mean, what do I know, right? But I really like the cast. I feel like, I think it’s a really good cast. It seems like it. I think people who work in newsrooms will kind of recognize some of the types of people like, no one’s based on any one person, but like, there’s like definitely archetypes of, “OK, I’ve worked with that dude.” You know, in every newsroom, there’s that dude. 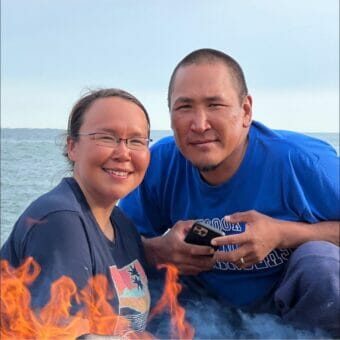 It all began while they were out hunting for geese.