New Alaska Congresswoman Mary Peltola was awarded a seat on the House Natural Resources Committee, where Chairman Raúl Grijalva said she will sometimes be at odds with her fellow Democrats.

The Resources Committee considers issues of huge importance to Alaska: Oil development. Oceans and fisheries. Federal land management. Native Affairs. Peltola’s predecessor, the late Don Young, was on the committee for decades and used to be its chair.

Next week, the Resources Committee will take up a rewrite of the Magnuson-Stevens Act, the law governing fishing in federal waters. Before he died in March, Young was working on it with Rep. Jared Huffman, D-Calif.

Grijalva claimed Peltola, even before she’d been in office a full day, had already exerted influence over it.

“Because there was some areas of dispute that hadn’t been settled,” Grijalva said. “She came in and basically settled them.”

He named one area of dispute that he says is now resolved: Bycatch, when fishermen accidentally catch one type of fish while targeting another.

Peltola wants new bycatch limits on ocean-going trawlers, a fleet she says contributes to the decimation of salmon runs on the Yukon and  Kuskokwim rivers. The trawling industry rejects that theory.

Josh Wilson, Peltola’s interim communications director, said by text that she’s not ready to discuss the negotiations over the fisheries bill and “doesn’t like to jinx anything.”

During a long series of Wednesday afternoon votes, Rep. Huffman, the Resources subcommittee chairman in charge of marine matters, took a seat next to Peltola in the House chamber. The two engaged in what looked to be light-hearted conversation for at least 10 minutes.

“Our caucus has not supported the Willows in the past, even when the dean was promoting it,” Grijalva said, referring to Young.

Grijalva says Peltola won’t always get what she wants, and Don Young didn’t either. 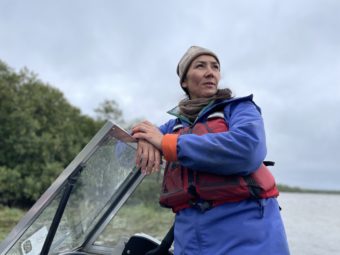 She wants people in the nation’s capital to know of all the vehicles damaged in the storm and how important they are to a family’s food security.