Fighter jets from Joint Base Elmendorf Richardson intercepted Russian reconnaissance planes three times last week in airspace around Alaska. That’s happened often in recent years, but a Fairbanks-based military analyst says it’s noteworthy because this time, it happened while the United States is helping Ukraine defend itself from Russian invaders.

JBER-based F-22 fighters scrambled on Monday, Tuesday and Wednesday last week to intercept a Russian IL-20 that had entered the Alaskan Air Defense Identification Zone, or ADIZ. That’s international airspace, but it’s not unusual for a nation to send fighters out to meet foreign aircraft that enter their ADIZ and often to accompany them until they leave it.

“On average, we conduct about six to seven intercepts a year,” says Capt. Lauren Ott, a spokesperson for the North American Aerospace Defense Command’s Alaskan Region based at JBER. Ott says the number of intercepts has varied annually since Russia resumed its so-called out-of-area long-range aviation activity 15 years ago.

This year, however, the usual game of cat-and-mouse is playing out in an entirely different context — one where the United States and Russia aren’t at war but are certainly at odds because of the U.S’s leading role in supporting Ukraine.

“The recent activity by the Russian aircraft in the Alaskan ADIZ is not perceived as a threat, nor is the activity seen as provocative,” she said.

But a military analyst based at the University of Alaska Fairbanks says the intercepts are notable at the very least.

Troy Bouffard is a 22-year Army veteran who now directs UAF’s Center for Arctic Security and Resilience. He says the timing of the Russian sorties is notable because they likely were intended to send a message to the United States and its allies.

“Russia is trying to demonstrate that it can still project power in different areas, even being decisively engaged in Ukraine,” he said in an interview Monday.

Bouffard says it’s also no coincidence that the Russians decided now is a good time to resume the flights around Alaska because the Il-20 is equipped for intelligence, signals and reconnaissance missions. He suspects they were interested in radio communications between the U.S. and allied forces engaged in the latest round of Red Flag military training exercises that were going on around the state last week.

“It was definitely right in the middle of Red Flag,” he noted.

Bouffard said he thinks the Russians also were sending a message by conducting the sorties with only one Il-20 and not a Tu-95 Bear bomber, which often carries out the missions accompanied by a Russian jet fighter. He says the flights enable the Russians to gain useful intelligence, sometimes just by noting how the Americans respond.

“All the aircraft that they send into an ADIZ is meant to invoke a response and a reaction for the purposes of being able to monitor that and see if they can learn from it,” he said.

Ott said that there haven’t been any Russian aircraft sorties since last week. She declined to say whether there had been any others earlier this year, or to say exactly where the Il-20 entered the Alaska ADIZ. 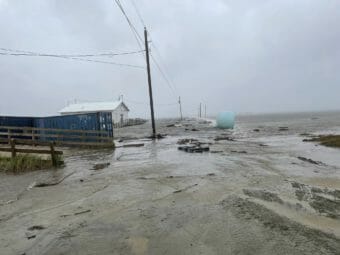 The damage from the storm ranges across a thousand miles of Western Alaska, from Kuskokwim Bay all the way up through the Bering Strait. 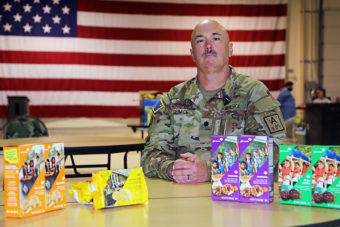 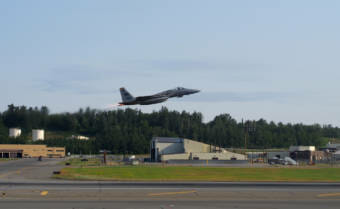 Amid driver shortage, airmen will drive school buses on Joint Base Elmendorf-Richardson

It’s the latest effort by the district to address an ongoing shortage of bus drivers that has left most Anchorage students going weeks without bus service.