When Metlakatla residents spotted invasive green crabs in their waters on July 22, the critters were dead. This time, they were alive.

Staff from the community’s Division of Fish and Wildlife have been combing the beaches and waters around Metlakatla for the five-spined crabs, which federal officials have called one of the most invasive marine species around.

On Wednesday, Metlakatla Indian Community announced they had found 10 live crabs — four late last week and six on Tuesday. Then Albert Smith, Metlakatla’s mayor, said three more crabs were caught on Thursday for a total of 13.

The crabs are largely falling into salmon traps around Tamgas Harbor.

“There’s a salmon trap that has been there for hundreds of years,” Smith explained. “And that’s kind of where they’re kind of congregating a little bit. Because it’s like a tide pool. So that’s where they’ve been catching them.”

Shrimp pots are also being set to catch the crabs, which is how staff from the Division of Fish and Wildlife caught one crab on Thursday. Another was found in an area with lots of eelgrass.

Of the 13 trapped live crabs, three are female and 10 are male. Smith said the Tribe’s scientists are preserving them alive for now for research.

“The people that are catching them are our Fish and Wildlife staff,” Smith said. “So they’re bringing them right to the office. And then we put them in a bucket of water, and then put them in the refrigerator until they can get all the data they need from them.”

In a statement, the Tribe announced that officials are working with federal and state partners to conduct genetic analysis and outreach efforts.

“It is essential that we address this matter urgently as GC (green crab) target juvenile Dungeness crab, juvenile salmon, shellfish and mollusks,” the statement read. “This species poses a real and present threat to our most critical subsistence and commercial resources.”

Smith said he’s concerned about what it means for the community’s traditional food sources.

“They go after salmon habitat and salmon fry,” he said. “Also, they go after most of all of our subsistence lifestyle.”

But at the same time, the discoveries haven’t been a total surprise.

“We’ve been watching them work their way up the coast, in the Haida Gwaii,” Smith said. “And then also over by Prince Rupert last year, which isn’t far from here.”

Smith said he’d like to avoid a situation like Washington’s experience dealing with the invasive crabs. The appearance of the species prompted Gov. Jay Inslee to issue an emergency proclamation.

For now, Metlakatla’s scientists are keeping an eye on the area and trapping the crabs. The goal of that work is to learn more about just how many might be in the area.

As for what to do with the crabs, NOAA strongly advises against releasing the invasive crabs back into the water. Smith said the community is still discussing options, but he noted that adding the crabs to the community’s garden compost pile might be a good idea.

Sightings of European green crabs can be reported to the Alaska Invasive Species Hotline at 1-877-INVASIV. 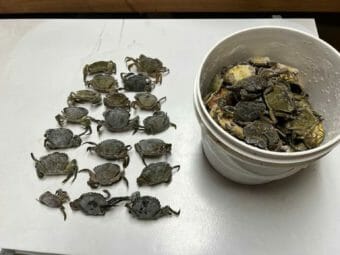 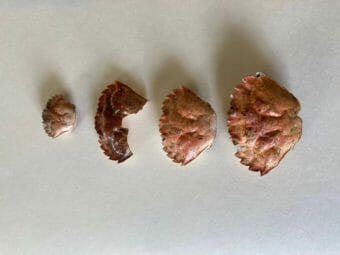 The crabs are shellfish predators, credited with the decline of the softshell clam fishery in Maine. They also uproot eelgrass beds, which serve as habitat for herring and salmon. 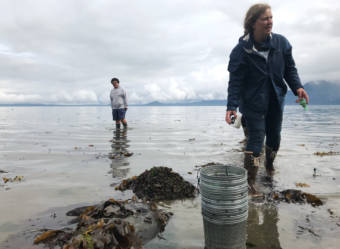