Researchers in the Sitka Tribe of Alaska are trying to figure out how far subsistence herring eggs travel across the state — and beyond — each spring.

The distribution network for herring eggs is complex and far reaching. It’s estimated that around 87% of eggs harvested out of Sitka are given away, and eggs are often shared several times before they reach their final user.

Kyle Rosendale is a fish biologist for the Tribe. He says they’ve been surveying harvesters in the post-season since 2002. This year they’re expanding their survey efforts to include folks on the receiving end of the eggs, which are traditionally gathered on hemlock branches in Sitka Sound each spring.

“We received some feedback from people, and realized there’s a lot of information we’re not capturing about the distribution network for herring eggs,” Rosendale said. “We ask harvesters about meeting their needs and how they share herring eggs in our post-season harvest surveys. And this survey looks from the other end of the distribution network. How are final consumers meeting their needs? How do they receive eggs?”

Rosendale says they’ve received around 200 responses, so far. The survey takes about five minutes, and they’re looking for anyone who likes to eat subsistence herring eggs to respond, whether they live in Sitka, Southeast Alaska or farther away.

Rosendale says the Tribe hopes the data will paint a picture of the overall reach of local herring eggs and will inform future research. Participants who fill out the survey will be entered in a drawing to win cash prizes. 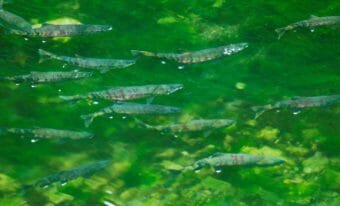 The collapse of salmon runs vital to western Alaska triggered the creation of the Alaska Bycatch Task Force.