The U.S. Forest Service is proposing to restore land on an island in the Tongass National Forest that has been logged in past decades. The federal agency wants this 23,000 acres of developed land to match the wilderness area that surrounds it.

Cube Cove is on the northwest side of Admiralty Island. The area was heavily logged – mostly by clear cut – in the 1980s and 90s by Shee Atiká, Sitka’s Native Corporation. The U.S. Forest Service bought the land for just over $18 million, completing the deal in 2020. Shee Atiká had done some reclamation work after the logging, but the Forest Service wants to finish it up.

“Admiralty Island is a special and unique place, every inch of it anyways,” said Marci Johnson, a wildlife and fisheries biologist with the U.S. Forest Service. “Certainly some unique characteristics with the concentration of brown bears, eagle nests and a lot of intact, old growth forests throughout the island.”

Before the federal purchase, it was the largest privately owned land surrounded by a federal wilderness area. It’s now joined that protected area, known as Kootznoowoo Wilderness, which makes up most of Admiralty Island.

Shee Atiká did not immediately respond to a request for comment.

Because of past logging, there are many remaining roads, bridges and culverts. The Forest Service proposes removing three large steel bridges and culverts that would affect fish passage. They also want to remove or modify some of the road beds that might affect water flow. Johnson says there is a coho salmon run and trout in the streams.

“So eventually this type of infrastructure does fail, and it could become a fish passage issue and water quality issue,” Johnson said.

The federal agency is also proposing to thin some of the new growth trees to allow space for larger ones to grow, especially around waterways.

There are two federally managed recreational cabins on site that see visitors. Johnson says that the driving force behind the restoration project is preserving the wild character of the land now and in the future.

“Providing that wilderness experience in say a visitor in 300 years is still important too,” she said.

A few years ago, a pilot project removed a large culvert on a fish bearing stream near a lake in the area. It was run by the Southeast Alaska Watershed Coalition with help from an Angoon youth program.

The village of Angoon is south of Cube Cove on the western shore. Its residents have lived on Admiralty Island for as long as anyone knows and subsistence fish and hunt there.

“We put up fish to last us the winter,” said Tribal Administrator Charles James. “We can our fish; we smoke it,”

James doesn’t know if any residents go near the logged areas now but he says restoring the land makes sense.

“I think it would be nice to have those trees and stuff growing back and get all that stuff out of there,” he said.

The Forest Service plans to do more field work this summer to fine tune the details of the project, such as what tools and equipment will be needed. They are taking public comment on the proposal through July 22. They expect all the work to be completed within five years.

It’s unknown how much the restoration will cost and what partnerships might help fund it. But it’s been identified as a priority project by the Tongass National Forest. 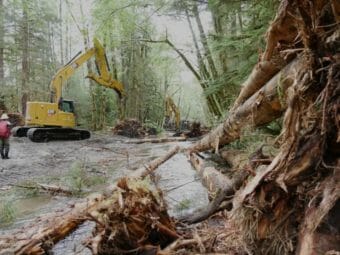 The goal is to mimic natural processes to bring back topsoil and improve fish habitats. 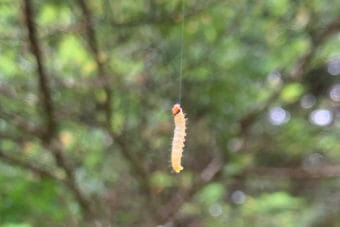 Southeast Alaska's budworm infestation is still going, and they seem to be moving on to spruce trees

While budworms have been known to target hemlock trees, they seem to be moving on to spruce this year. 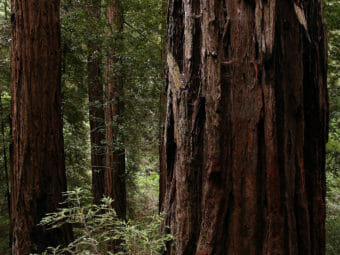