A new federal class-action lawsuit filed against Alaska’s Office of Children’s Services asserts that the state is failing children in foster care. Lawyers for the 13 child plaintiffs claim the state has known about widespread foster care problems for years but hasn’t addressed them.

In the 90-page complaint filed Thursday, they say problems include high caseloads for caseworkers and high turnover among those workers, plus few adequate foster homes and a lack of adequate support for placing foster children with family members.

The group of attorneys representing the plaintiffs include A Better Childhood, a New York-based advocacy nonprofit focused on foster care. The group has filed a number of class action lawsuits in other states, including Oklahoma, West Virginia and Indiana.

Marcia Robinson Lowry, executive director of A Better Childhood, said Alaska isn’t the worst state when it comes to meeting federal requirements, but it’s far from the best.

“Alaska is fifth-worst in returning kids to their family homes and seventh-worst in the country on the frequency with which children are visited, which is a federal mandate,” Lowry said.

The state Department of Health and Social Services and OCS are listed as defendants in the complaint.

Officials with the state agencies said Friday that they hadn’t been served with the complaint and couldn’t comment on the case. In a statement, they said, “What we can say is that the State takes its obligations for reunification of families, foster care, and the health and welfare of all Alaskan children very seriously.”

The complaint says the problems in the state’s foster care system are widespread.

It says the system is causing particular harm to Alaska Native children, who make up roughly two-thirds of all Alaska children in foster care, despite being a little over a fourth of the state’s population. Under the Indian Child Welfare Act, or ICWA, child welfare agencies are federally compelled to work as hard as possible to house Native foster children with their families or tribes.

The complaint details numerous stories from the plaintiffs, including five Alaska Native siblings who hadn’t been placed in homes that complied with ICWA, a boy with ADHD who had been moved to seven different homes since April of last year and a 16-year-old girl who reported she was sexually assaulted at a mental health treatment facility she was placed at hundreds of miles from her home.

The complaint also says the state isn’t doing enough to address foster children who have disabilities.

Lowry said another issue is that sometimes when kids are placed with family members, the families aren’t licensed by the state as official foster parents, so they don’t receive the funding and support that comes with that licensing.

Lowry said the plaintiffs hope their lawsuit results in the federal court ordering the stateto take a number of actions, including reducing caseloads for foster care workers. Currently, those workers sometimes are trying manage case numbers that total three times the national average. Turnover among staff is roughly 60%.

“So there’s a lot that has to be done with regard to caseloads, and the state has to develop more and better foster homes,” Lowry said. “At the same time, the state needs to provide services so that kids can return home more quickly, or if that’s not appropriate or safe, so the kids can be adopted, either by relatives if possible or other people as well.”

There are roughly 3,000 children in the foster care system in Alaska.

Correction: An earlier version of this story said the lawsuit is in Superior Court. It was filed in federal court. 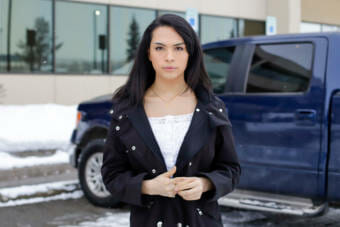 The number of children in Alaska's foster care system has been pretty stable during the pandemic, but the number of foster homes has declined dramatically.