MANILA, Philippines – With 94.23% of precincts already accounted for, Ferdinand “Bongbong” Marcos Jr., the only son and namesake of the late Philippine dictator, is the presumptive winner of the 2022 presidential elections in the Philippines.

It is a historic win nearly four decades after Filipinos booted his family out of power, ending a well-oiled campaign that sought to bury the past, rally for unity, and evade scrutiny.

As of 4:41 am on Tuesday, May 10, partial and unofficial results from the Commission on Elections’ transparency server showed Marcos Jr. with 30,015,540 votes so far, representing 58.86% of total votes reported for all presidential candidates.

The 64-year-old Marcos Jr. is set to become the 17th president of the Philippines, as he receives more than double the votes of his closest opponent, Vice President Leni Robredo, who has garnered 14,309,524 votes or 28.06% as of the latest update.

He will succeed the strongman Rodrigo Duterte, winning without his outright support. The President’s daughter, Davao City Mayor Sara Duterte, was Marcos Jr.’s running mate, getting 30,310,743 votes or 61.08%, as of 4:06 am on Tuesday.

Marcos will lead the Philippines for the next six years, and will have to steer the country into economic recovery after a global pandemic. He is now the country’s chief diplomat, who flip-flopped on standing with Ukraine amid a Russian invasion that threatens security in the whole of Europe.

“This is bad for the country. There would be no good governance as we know it. Cronyism and dynasty will thrive,” said jailed opposition leader Leila De Lima.

Marcos has promised to continue Duterte’s warm ties to superpower China, and will keep at bay the International Criminal Court investigating the President and his men for alleged crimes against humanity for the thousands of killings during the drug war.

As president, Marcos will have power over executive agencies involved in recovering his family’s ill-gotten wealth, such as the Presidential Commission on Good Government and the Office of the Solicitor General (OSG). The PCGG was still trying to recover P125 billion more in stolen wealth.

Marcos also has a standing contempt order in the United States – among other cases that he and his mother Imelda are facing. The business community fears that investors will steer clear of the Philippines under a Marcos presidency.

“Well, we’ll just have to prove them wrong if we get the opportunity and we will,” said Marcos in an interview with One PH on March 21.

Strong from start to finish

Marcos started and finished strong, peaking at 60% in a Pulse Asia survey in January 2022, and securing a huge lead at 56% in April before election day. Robredo could only manage a peak of 24%.

Like his father before him, Marcos built his clout first as congressman of Ilocos Norte, and then senator. Many believe his vice presidential run in 2016 was a test drive – to be more prepared to go for the gold.

“[Returning to] Malacanang would be a great help,” said his mother Imelda in 2014.

It seems it has been a lifelong family plan, as Imelda herself ran for president in 1992 after their family were allowed to return from their exile in Hawaii.

Learning the hard lessons from his defeat in his 2016 vice presidential run, Marcos sought to consolidate his base by getting a strong running mate. With the help of former president Gloria Macapagal Arroyo, he managed to convince Duterte’s daughter Sara to be his vice president – even if Sara’s was performing better in presidential opinion polls last year.

He also managed to get the support of powerful dynasties and big business, such as the magnate Manny Villar. Next, he courted the transport and workers sectors, but not without backlash from the other factions who highlighted that Marcos the dictator was the one who sunk those sectors in the first place.

Marcos showed this as proof of the image he wanted to sell: that he’s the unifying factor in Philippine politics.

Alongside his campaign of unity is the policy of evading scrutiny, as he snubbed all the debates and ran away from the independent press. This way, he was able to preserve his bubble by capturing a craving among Filipinos to have a more positive feel of politics.

It’s “part of the mood of the times,” said political analyst Julio Teehankee.

“Given the pandemic, we were thinking, after what we experienced in the pandemic and how the government handled the pandemic, we would long for a more technocratic good governance, reformist approach, but instead the opposite happens – pagod na ang tao, wala na rin silang pasensiya, so ano ang solusyon? Magkaisa tayo (people are tired, they don’t have patience, so what is the solution? Let’s unite.),” said Teehankee.

Teehankee added: “It may be illogical for us, but there’s that inherent logic, there’s a rationale with the masses.”

It also helped that the message was so simple, said Ronnie Holmes, president of polling firm Pulse Asia, which predicted the win, projecting a big-margin preferential rate for Marcos as early as December 2021.

“It defuses the extent by which he is perceived by his opponents as a polarizing figure, by expressing himself as the unity candidate, and what he does is tell people who are open to support him that I will not anymore be the person who will polarize the nation,” said Holmes.

Marcos stuck to that message so firmly, he never bothered to answer pressing issues about him: his direct liability as executor to pay their estate’s long overdue P203 billion tax, his criminal conviction for not filing his own tax returns, and even the bad reviews from his constituents in Ilocos Norte calling him an absentee governor.

So disciplined that he is able to lie in the select television interviews he grants: he lied about being accessible to media, about his Oxford education, and backpedaling on his family’s claim of owning gold.

Researchers documented a well-entrenched social media network benefitting Marcos and undermining all his opponents, some networks are a clear disinformation web, while some focused on rebranding like hyping up Marcos Jr.’s eldest son Sandro.

Yet Marcos Jr. denied time and time again he had any direct link to the trolls, although those critical of him, even journalists, were subjected to red-tagging and other targeted online attacks.

“He gets away with it, in large part, because of this massive disinformation infrastructure he has built around himself. Even if he evades real journalists, his vloggers can easily do damage control, mainly by gaslighting and attacking journalists,” said political journalist Christian Esguerra.

Senator Migz Zubiri, his backer, told the Filipino people: Marcos will not become a dictator. Cagayan Governor Manuel Mamba, under party instruction of the Villars to support Marcos, was less sure.

Mamba settles for hoping he does not become a dictator.

This piece is republished with permission from Rappler.com.

Rappler is an online news publication based in the Philippines. 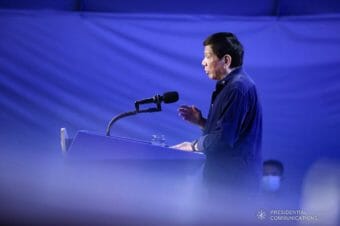 Up until last day of campaigning, Duterte does not endorse Marcos for president

President Rodrigo Duterte is a no-show at the final rally of Ferdinand Marcos Jr and his daughter Sara Duterte. 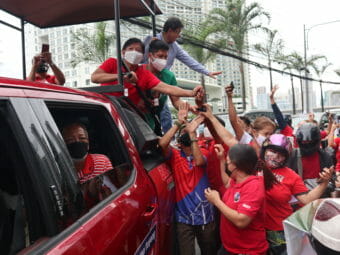 As Filipinos head to the polls, some voters in Alaska bet on a political dynasty

Hundreds of voters in the Philippine national elections will be waiting for the results in Alaska. And some hope the outcome makes way for a return to the past.