A subsistence fishing method that has become more popular with sockeye harvesters in Sitka in recent years is now banned.

The Alaska Board of Fisheries last week prohibited the use of spear guns in the Redoubt Lake management area.

The Redoubt Lake Falls are about a 15-mile skiff ride from Sitka. The Forest Service fertilizes the lake every year, and the sockeye run there typically produces large numbers of fish that are a bit bigger than their cousins at Necker Bay and Klag Bay — both of which are farther away and more challenging to reach.

Dipnetting at the falls and snagging in the bay are the most common techniques for subsistence harvesters, but over the past few years more people have been putting on wetsuits and snorkels to fish with spear guns at the base of the falls.

Sitka’s Fish & Game Advisory Committee voted on dozens of management proposals last fall, in preparation for the Alaska Board of Fisheries meeting this March in Anchorage, but it didn’t vote on the proposed spearfishing ban.

Committee chair Heather Bauscher explained the situation to the Board.

“This was a funny proposal at our meeting because the folks that have been involved in this emerging spear fishery for the sockeye kind of showed up in force, because there’s been people doing this for years, and it’s been growing,” Bauscher said. “We had this long conversation trying to figure out how to draw lines to allow them some sort of space until we realized that actually it wasn’t legal. And part of what was not legal about it is you could do the spear from the shore, but you couldn’t be submerged in the water with the spear.”

Bauscher is correct: A spear is legal gear for subsistence, provided you use it from shore. Proposal 132 presumably would ban the use of a spear by an individual who is immersed. Being immersed – anywhere in the frigid waters of Alaska – means using dive gear.

“The Redoubt Management Plan only lists spear and not dive gear,” Tydingco said. “So spear is a little gear type. However, dive gear is not. Which would basically mean that being submerged and using specifically your snorkel gear would not be legal in the subsistence fishery.”

The Board of Fish struggled a bit to clarify what it was being asked to regulate. Board member Israel Payton sympathized with the proposer, Sitkan Floyd Tomkins, who wrote that divers disrupted schools of sockeye as they prepared to head into the falls, and the divers were entering and exiting the water with a loaded weapon in close proximity to fishermen on shore.

Payton recounted his own experience dip-netting for salmon near Homer with a spear fisherman in the water.

“It’s disruptive to all the other dipnetters and snaggers in the area,” Payton said. “And it’s not an efficient means to harvest these fish. So I don’t know how it’s going to shake out, but I would like to not see this happen at all. I’m for banning people swimming underwater, by any means, harvesting a fish and kind of disrupting traditional means of harvesting fish.”

Member John Wood was less sympathetic. He believed that sorting out user conflict wasn’t in the board’s purview.

“In this particular case, yes, (spearfishing is) disruptive, but I don’t know that we have the responsibility of making sure that the grounds are peaceful,” Wood said. “So I’m having trouble supporting it. I understand the sentiment.”

Proposal 132 banning spear fishing for sockeye at Redoubt Falls while immersed in the water passed 4-2, with board members Jensen and Wood opposed. 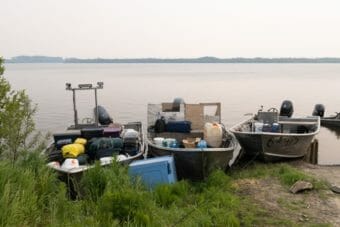 Chinook salmon counts are the lowest ever recorded at this point in the season, and state and federal fishery managers do not expect them to meet escapement goals. 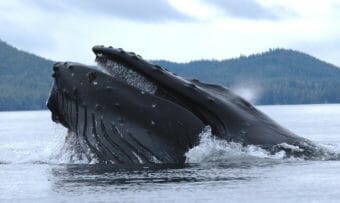 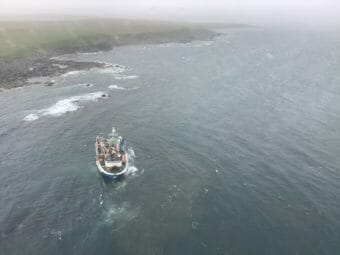 Fishing boat that ran aground off Unimak Island will be scuttled

A salvage company says the 98-foot F/V Pacific Sounder is too stuck to be towed.