A bill moving through the Alaska Legislature would streamline the state’s approval process for small nuclear reactors, which have been touted as cleaner, more cost-effective sources of energy for Alaska.

There are no microreactors operating anywhere in the United States. But a few pilot projects are planned, including one at Eielson Air Force Base. The federal Nuclear Regulatory Commission must approve any new reactor, but House Bill 299 from Gov. Mike Dunleavy would exempt microreactors from some decades-old state requirements.

“When our atomic energy authority was drafted, I think back in the 70s, it had in mind those large legacy reactors,” she said. “But those microreactors would still be subject to local approval, as well as DEC permitting and NRC permitting.”

HB 299 arose from recommendations made by the the Alaska Center for Energy and Power at the University of Alaska.

“This cleanup of state statutes enables communities or industry to make decisions around considering nuclear reactors as part of their future energy mix,” said Gwen Holdmann, the center’s director.

“If a site lost all power, you’re not reliant on backup power and things like that. It’s going to cool down through natural physics and thermos-dynamic processes,” she said. “The reaction will shut itself off automatically rather than require some sort of active involvement in order for that to happen.”

Holdmann says microreactors’ uranium fuel is encapsulated in a heat-and-crush-resistant ceramic jacket, and that the uranium would typically last about 10 years before needing to be replaced and shipped out of state.

“So electric utilities considering microreactors can move forward with their potential projects confidently knowing that a portion of the permitting process has been streamlined,” he said.

“While these nuclear microreactors are being touted as a solution for the climate crisis and energy needs in rural Alaska, I believe that it’s a false solution and that these reactors are actually quite dangerous,” she said. “From the mining of uranium, which usually takes place on Indigenous lands, through the enrichment process. And then there is the untenable problem of radioactive waste disposal, and that has not been solved.”

Miller said she is also concerned about the security of microreactors in Alaska, especially if deployed in remote locations.

Under the bill, microreactors proposed for areas without local government would still need to get siting approval from the legislature. 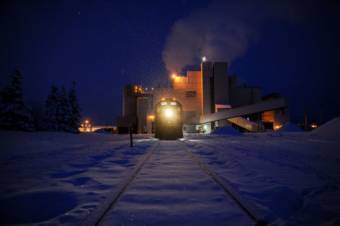