Republican Sen. Shelley Hughes is the leader of the Senate majority. Her new bill had its first hearing in front of a Senate Education Committee in early March.

Hughes told that committee that trans female athletes are bigger and stronger than cisgender females.

A cisgender person identifies with the gender they were assigned at birth. A trans person does not. Hughes says trans female athletes have an unfair advantage.

“Girls and women should not be robbed of the chance to be selected for a team to win a championship or to be awarded a college scholarship,” Hughes said.

The person who oversees high school sports competitions in Alaska says the idea that someone will be robbed of a scholarship by a trans athlete isn’t accurate.

“This is a solution looking for a problem,” Billy Strickland said.

Strickland spent most of his career at the Lower Kuskokwim School district. He lives in Anchorage now, where he’s the executive director of the Alaska School Activities Association. He says he only knows of one trans female athlete in all of Alaska’s history and she’s already graduated.

He says she came in second in one big track and field race and third in another. But her success didn’t prevent any other athletes from getting scholarships or making it onto a college team.

But Sen. Hughes says that just because a trans female athlete hasn’t beaten out a cis female for a scholarship yet doesn’t mean it won’t happen. She says her bill protects against that possibility.

Trans woman Emily Mesch says that school sports should be about education and inclusion.

She’s also a member of the Juneau Human Rights Commission. She’s against Hughes’ bill. One reason is that it’s not clear how it would be enforced or how an athlete’s birth-assigned gender would be determined. The thought leaves Mesch uncomfortable.

“I don’t even want to list the possibilities of how you would check that, like, it’s not a comfortable thing,” Mesch said.

Begich is a Democrat, he sits on the education committee with Hughes. He said he doesn’t support the bill and questions whether it’s constitutional.

Hughes agreed that, as written, the bill leaves its enforcement open to interpretation by the state’s Department of Education. But she said the committee could choose to amend it to be more specific about enforcement. This bill looks similar to an Idaho law that was passed but didn’t go into effect. A federal judge considering the bill has said it’s likely unconstitutional.

Begich points out that transgender kids have a higher rate of suicide than cisgender kids. And this type of legislation would hurt them more.

Hughes says that hurting trans kids is not her intention. She says she wants to provide them with essentially a separate but equal playing field.

“I am not transphobic. I love people, no matter what their choice, as far as their identity, I have value for them,” Hughes said.

But Emily Mesch says that Hughes’ actions speak differently than her words.

“Sen. Hughes might believe that she’s not transphobic but her actions are transphobic in the extreme, so that makes her transphobic,” Mesch said.

For his part, ASAA Executive Director Billy Strickland said he prefers ASAA’s policy to this bill. That policy allows individual schools to determine an athlete’s gender. Under this policy, girls must play against girls’ teams and boys’ and co-ed teams must play against boys’ teams.

Strickland says this bill was written without input from the Alaska School Activities Association.

The Senate committee considering the bill will hear public testimony on Senate Bill 140 on Saturday, March 12. 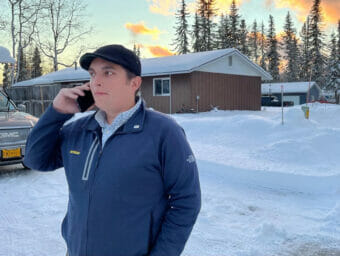