Since September, the University of Alaska Anchorage has been offering regular Unangam Tunuu classes, and it’s the first time in over twenty years that the language classes have been taught at the university level.

At the helm of the course is Haliehana Alaĝum Ayagaa Stepetin, an Unangax̂ artist, scholar and subsistence fisher from Achan-Ingiiga, or Akutan. For the last nine years, she’s been studying the language, which is native to the Aleutian and Pribilof Islands region, with her mentor and Unangam Tunuu expert Moses Qagidax̂ Dirks. Together, the two are co-teaching these classes.

In her introduction, Stepetin gives a brief family history and explains where her parents are from — an exchange well known in the Native community. At the end of the 15-week course, her students will give a similar introduction in Unangam Tunuu as their final presentation.

Stepetin said this project was inspired by her experience traveling across Indigenous homelands and witnessing this exchange everywhere. She wanted to hear more Unangam Tunuu being spoken in the world, she said.

“I’m in a Native American Studies PhD program, so almost everyone is Native,” Stepetin said. “We all introduce ourselves, and I was like, ‘it would be really great if people were doing this, not just at the Aleut Villages Conferences, but everywhere that Unangax̂ people are in the world.’”

Sharing traditional introductions in a classroom setting has become more common in recent years, but the origin of the greetings dates back to nearly six decades ago, according to Stepetin.

This period was one of the first times various tribes from around the state gathered in large numbers. After Alaska became a state in the late 1950s, there was an imminent threat of land loss for Indigenous peoples. This threat prompted the creation of the Alaska Federation of Natives, the largest Native organization in the state.

Outlining familial ties through introductions is important among Native people because it’s a way to relate to each other, she said.

“And because a bunch of people at the time had known each other, especially through being removed to boarding schools or different residential schools,” she said. “They would be like ‘oh, yeah, I know your mom,’ or, ‘I know your dad. I’ve heard of that village. So-and-so, who I went to school with is from there.’”

This course — and the collaboration among Stepetin, Dirks and supporting organizations like the Aleutian Pribilof Islands Association — marks a big step toward Unangax̂ language revitalization.

The course culminated in a presentation where students were able to introduce family members, describe their favorite hobbies and talk about geographic roots — all in Unangam Tunuu. Stepetin said that all 23 students from the fall semester successfully completed this final project.

Stepetin hopes to teach level two Unangam Tunuu in the future. That course would likely cover conversations relevant to life on Unangam Tanangin — or Unangax̂ lands — such as weather and subsistence. 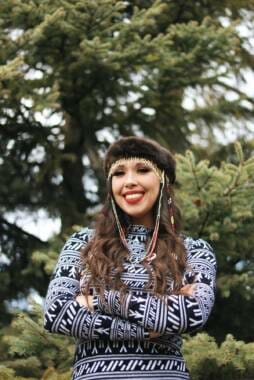 The course will be one of several Alaska Native language courses offered at the university through its Alaska Native Studies program.