Lawyers for five different groups of plaintiffs who sued to block the map made their closing arguments on Friday. And they were countered by the attorneys for the board and map supporters.

Much of the day was taken up by whether the board treated residents of Valdez  and the Matanuska-Susitna Borough fairly when it put them in the same district. Rather than including communities between the two in the same district, the map links them through the Chugach  Mountains.

Robin Brena represented the city of Valdez. He said the board made Valdez wait to be placed into a district until after the rest of the state had been taken care of. He told Superior Court Judge Thomas Matthews that the board treated the map was like a pot of porridge.

“They fed it to all their favorite children,” he said. “They got to the two left remaining at the table: Valdez and the Mat-Su Borough. And there wasn’t anything left in the pot. Any parent would go back and rebalance the meal so that everybody got a little less, but that everybody got something.”

Stacey Stone is the Mat-Su’s lawyer. She said that at one point in the redistricting hearings, the board members said they would consider pairing Valdez with other Prince William Sound communities. But that discussion didn’t happen, at least publicly.

“The board then adjourns to executive session and something happened outside the eyes of the public, that impacted the public,” she said.

Nathaniel Amdur-Clark defended the map. He’s a lawyer for Interior organizations, including regional Native corporation Doyon and the Tanana Chiefs Conference. The organizations supported a proposed district that neighbors Valdez and stretches to include most of the Yukon River. Its district number is 36.

Amdur-Clark opposed an argument by Brena that the large, horseshoe-shaped district fails to meet a provision of the state constitution. It requires districts to be compact. He said Alaska courts have defined “compactness” differently than those in smaller states.

Matt Singer served as the board’s legal counsel and advocated for it on Friday. Singer said the board considered Valdez and the Mat-Su throughout the process. He said Brena was wrong to compare them to children who wait for porridge.

“But when I hear these arguments, I’m reminded of a child who’s playing well with others, and then in the end decides to kick down the sand castle because they don’t get exactly what they want,” Singer said.

Singer said the board considered every possible option for Valdez, but each presented greater problems than including it in a district with portions of the Mat-Su, including Sutton and the outskirts of Palmer.

Singer also defended the board’s process in handling the pairing of House districts into Senate seats. East Anchorage residents sued to block a much of Eagle River sharing a Senate district with the South Muldoon neighborhood. Singer said they share the same city services and shop at the same businesses.

“And it’s for those reasons, your honor, that the state Supreme Court every single time has rejected the notion that certain neighborhoods have to go together,” he said.

Holly Wells represented the East Anchorage residents. She said the lack of public input on the Senate pairings after the board adopted the map was an abuse of the process. Residents had opposed linking Muldoon with Eagle River to the board before it made the pairings.

“They can fix that in 24 hours,” she said. “It takes the board a little bit of public notice, convening a meeting and having a hard look at the Senate pairings in this area, where the board gives the voices of East Anchorage at least a little attention.”

Matthews is aiming to issue his rulings on the cases by Tuesday, to allow time for the state Supreme Court to hear and issue a decision on any appeal by April 1. If the court orders new maps, the board would face a tight timeframe to finish them by the June 1 deadline for candidates to file. 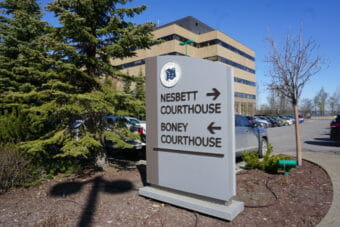 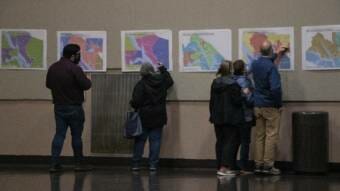