Prosecutors sought to establish this week if any University of Alaska Fairbanks students who were up late on a Sunday night in 1993, before final exams, saw anything suspicious on the second floor of the Bartlett Hall dorm.

That was where Sophie Sergie of Pitkas Point, 20, was found dead on a Monday afternoon. She had been shot in the back of the head, stabbed in the face and raped. Steven Downs of Maine, now 47, is charged with her murder and sexual assault.

Over the last two days of Downs’ murder trial in Fairbanks Superior Court, prosecutors called on people who are now in their 50s who were UAF undergraduates in 1993.

One of them was Vanessa Allen, a freshman living in the dorm that semester. In her testimony on Tuesday, she described feeling uneasy late the night of April 25 as she entered the bathroom on the east side of the building. She said she saw a light on in the tub room, which she thought no one ever used.

“It was a bathtub area, and it had a door. And I remembered the door was closed and the light was on,” she said. “And that light is never on.”

She said she had a final exam the next morning and wanted to take a shower. She described noises she heard coming through the wall.

“I don’t know if it was, like, firecrackers, or — that’s what it kind of sounded like,” she said.

Allen also described a rustling sound she heard while showering.

Jennifer Roy was also up late that night. In her testimony on Wednesday, she said she was a graduating senior and wanted to keep studying in preparation for an exam the next day.

“I was really tired and was trying to wake myself up, so I decided a shower might help,” she said.

On the second floor of the dorm there were two bathrooms with showers, one on each hallway. The bathrooms were in the middle of the floor and shared a common wall.

Roy said that while she was in the bathroom on the west side, at about 1:30 a.m. Monday, she heard noises through the wall in the other bathroom.

“Because it was the middle of the night, it was quiet,” she said. “And then all of a sudden I heard someone enter into the bathroom on the other side and then enter into the bathtub room. And then suddenly there was a loud thud against the wall.”

Roy described hearing murmuring through the wall, but could not discern distinct voices or tell how many people were in the bathtub room.

“Now, I assumed it was a male and a female, just because of the time of evening. And, you know, sneaking into that little room,” she said.

Later that day, Roy was returning from class and met a janitor in the hallway.

“I had taken my final. I was coming back to my dorm to sleep, and a janitor — she was running out of the bathroom, really upset, said she couldn’t tell me what was happening,” said Roy. “I couldn’t understand her. So she sort of pulled me in to show me. She pulled me into the bathroom room.”

Roy told the jury she and the janitor saw Sergie’s body in the bathtub. She ran to get a resident assistant on the first floor, who summoned law enforcement.

Former UAF Police Officer James French got to the scene about the same time as medics from the University Fire Department.

“I walked into the bathroom first and make sure the scene was safe, not realizing exactly what we had at that point, besides a student that needed medical attention,” said French. “And so I had them respond into the bathroom, once I cleared it, which only took a second.”

Earlier this week, the jury heard Sophie’s brother, Alexie Sergie, describe getting a phone call from Sophie’s dentist on Monday saying she did not show up for her morning appointment — the reason she flew to Fairbanks that spring.

Another friend, Joann Sundown, told the jury that Sergie had visited her on that Saturday night, and they looked through the college catalog together.

And her former roommate, Jolene Nanouk, and friend Eric Newlin told the jury they drove with Sophie and another friend out to see a movie and then up to Murphy Dome on Sunday evening to see a late April sunset and take the photo of Sophie — the image through which many Alaskans know her.

A lot more witness testimony is expected as the trial continues.

The court has applied strict rules to media recording, giving permission on a case-by-case basis. The court granted prior permission for KUAC to record. 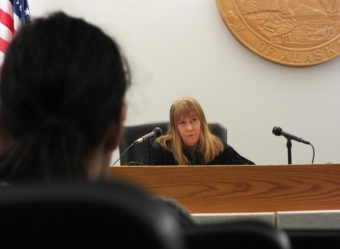 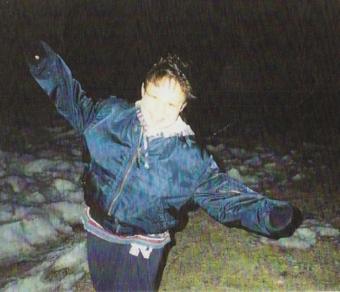 Alaska’s first homicide case built on genetic genealogy is set to go to trial next month.

Despite a hold on most court proceedings, the decades-old murder trial of Sophie Sergie is proceeding through preliminary steps in Fairbanks.