Efforts are underway to build a network of electric vehicle charging stations along the Railbelt that developers hope could connect the Kenai Peninsula to Fairbanks by the summer of 2022.

The Alaska Energy Authority recently announced the award of grants totaling $1 million to help Railbelt businesses and other entities install electric vehicle chargers. The nine grant recipients ranged from the Seward Chamber of Commerce to the Three Bears grocery store in Healy.

The AEA EV charger grant program is funded by Alaska’s share of a Volkswagen emission settlement. Thayer said the settlement money provides a way to jumpstart the installation of the chargers.

“I don’t think in the long run this is really a government program or something that the government should be involved in,” he said. “But with this initial funding that we had, and the need and the interests in electrical vehicles — we wanted to make sure people know that it could be done and they can use electrical vehicles for that 600-mile distance.”

Thayer noted that the grant recipients must pay a portion of the cost of installing their EV chargers.

“There was over another half a million dollars total that was matching,” he said. “So you have a lot of these grantees put up a lot of their personal funds to match these grants to be competitive. So I think a lot of people realize it’s kind of an investment in the future.”

The AEA selected grant recipients at locations between 50 and 100 miles apart but did not get any applications north of Healy, said Thayer. It plans to offer additional grants targeting that last portion of the route.

“We would love to find somebody in Nenana or in Fairbanks,” he said.

“We recognize that as people start to adopt this technology and have more EV vehicles, one of the big limitations is the range they can travel,” she said.

“This summer we partnered with ReCharge Alaska,” she said. “They are working to install a charger in Cantwell.”

ReCharge Alaska is a private company run by Chris Hall of Anchorage, a North Slope oil engineer with a passion for electric vehicles.

Kirk Martakis is Hall’s friend and fellow EV enthusiast. He runs the Driving on Sunshine charging station in Cantwell, where he produces and sells solar energy to EV drivers.

“Once people really start seeing how good this is, you know, all the gas stations will have DC fast chargers,” he said.

Martakis said the 75-kilowatt fast charger he and Hall plan to install with the Golden Valley grant money will be five times faster than his current units. And he anticipates that will boost already growing demand.

“Last year we saw a tripling of the number of vehicles that stopped in. And this year we’re looking at doubling it,” he said. “Most everybody who comes and charges here are so grateful that somebody has stepped up to the plate to allow for them to be able to travel from Fairbanks to Anchorage and to the Kenai.”

Martakis and Hall both emphasized that the Golden Valley supported project is as much about providing a fast-charging option as field testing the technology in the Interior.

Everyone involved in expanding EV charging access, however, also points to regulatory hurdles that need to be surmounted. The Regulatory Commission of Alaska is currently considering changes to better accommodate EV charging stations. 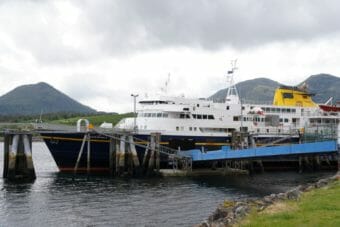