Dozens of sought-after Juneau homes are built in an avalanche path. And decades of studies have pointed to the very real possibility of a big, destructive slide in the neighborhood’s future. But researchers and residents gauge risks differently, and a mix of personal choices and policy decisions keeps people in at-risk areas.

Janice and “Butch” Holst have owned the yellow house in the middle of their block since the late 1970s. Janice sits in an armchair in her cozy, slightly nautical-themed living room.

“We’re a landmark,” she said. “The Holsts on Behrends Avenue.”

At the time of purchase, they didn’t know the house where they planned to raise their children was in a zone that National Geographic Magazine once called the nation’s worst risk for a major avalanche disaster.

Janice’s husband found out about the risk at work, from a colleague.

“He was bragging about having found a nice house right here. With the schools and having four kids, it was perfect. And this friend said, ‘Really? I don’t know why. It’s a big avalanche area. You’re not going to be safe there,'” Holst said.

“And and we’ve lived here happily ever since. But we have had some scary times.”

Behind their house, the 3,000-foot avalanche chute is bright green with new spring foliage that stands out from the darker, older forest on either side.

When avalanche danger climbed into the extreme range in their neighborhood last winter, the Holsts went and stayed with their grown son for a night. But Janice doesn’t have any plans to leave her home for much longer than that. The city has toyed with the idea of a home buyout program, but she says there’s almost no way they’d take it.

“Unless it was like, a million, trillion, zillion, billion dollars and a free maid and cooked meals every day. And a mink coat to keep me warm,” she said, whacking the arm of her chair for emphasis.

She says they have great neighbors, and the avalanches everyone’s talking about haven’t hurt them.

Lisa Ibias lives down the street from the Holsts. She and her husband didn’t know they were buying into an avalanche zone either. The seller, the realtor and even their lender did not mention the home was in a known avalanche path. She found out from a neighbor, after the papers were signed.

She raised six kids in the house, and says when there was avalanche risk, they slept against the uphill side wall in the basement. She says she’d take a home buyout if it was offered.

“If the city’s wants to buy the house, come on, bring it,” Ibias said. “I don’t know where I’d move. But not where there’s another avalanche.”

In 2011, the city of Juneau contracted Swiss researchers to assess the risk to the Behrends neighborhood. The report said a major avalanche could run all the way to Gastineau Channel with enough force to destroy wood frame houses in its path.

“When you look at town, and you see these huge snowfields looming over neighborhoods — I mean, the gentlemen I brought in from Switzerland and France and other places in Europe look at me and say, ‘we can’t believe you built here,'” Tom Mattice said.

He runs the city’s avalanche program, and he co-authored a study that describes the risk to 60 homes, a hotel and a boat harbor in the Behrends avalanche path.

City code reveals how seriously the municipality takes avalanche risk. In severe avalanche zones, like the Behrends path, the city of Juneau doesn’t allow new construction. No additions, no in-law units, no new bedrooms. Nothing that would increase the human density of the area.

But Mattice says right after he took on his job in 2008, he floated the idea of home buyouts. He says the assembly at the time balked at the cost share the city would have to take on and decided not to spend the money. Mattice says it’s a hard sell because people who have moved in more recently knew about the risk when they bought — sellers have to disclose it.

Mattice says he wanted to build a wall to protect the houses and do controlled detonation of landslides, but that idea didn’t gain traction either. Swiss experts said a wall wouldn’t work. And the city can’t force people to evacuate their homes while Mattice’s crew sets off avalanches.

Mattice says one way to get the city and residents to consider a buyout might be after an avalanche causes damage in the neighborhood.

“Because as soon as you get the insurance company involved because you damaged your house, that actually could be used as the cost share,” he said.

“So we could get some FEMA money to come in and buy that property, use that insurance money instead of government money to be that local cost share, make that homeowner whole, move them out of that residence and turn that into open park space for perpetuity.”

It might sound reckless to wait for a predictable disaster to happen rather than take action to get people out of the way. But Matisse tried that. For a buyout to happen now, he says the homeowner would have to take their case to the assembly for approval. He remembers less than half of residents were even interested in a buyout. Some people on Behrends think the studies overestimate the risk. One accused Mattice of fear mongering.

Sherri Brokopp Binder is a community psychologist and an independent researcher based on the East Coast.

“I’m a disaster researcher; I think about disasters all the time. But for residents, disasters are just one point among many that make up you know, the complex reality of their lives,” she said.

She studied home buyouts in the wake of major storms like Hurricane Sandy. And she found that while municipalities see buyouts as a tool for prevention, people see them as a tool for recovery. That is, most homeowners don’t want to leave a perfectly good home in a dangerous place. But they are more likely to consider leaving a damaged home.

She says there are social consequences to a move — think of the Holsts who love their neighbors — and financial consequences. There’s no guarantee about getting the market value for a home. Juneau’s housing market is tight. If more than 30 households wanted to move at once, it would be tough.

Current city policy offers residents an avalanche warning system — someone to literally knock on their doors and ask them to get out of harm’s way. But while the city won’t add people to the area, it hasn’t invested in a plan to reduce the number of people who live in the hazard zone yet. For those residents, the only path out of harm’s way is to sell their homes, passing the risk to someone else.

This story is part of a KTOO series about Juneau’s urban avalanche risk. 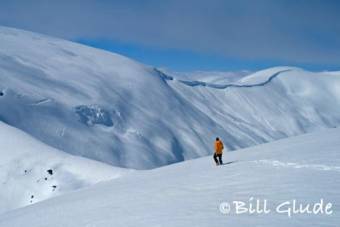 'Night and day': What Juneau learned when an avalanche turned out the city's lights

In the spring of 2008, a huge set of avalanches wiped out towers for a power transmission line, severing Juneau’s connection to its main source of hydroelectricity. 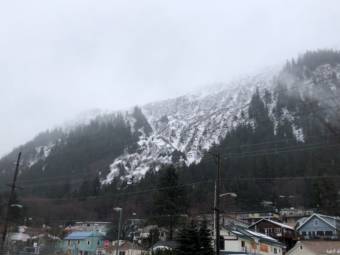