The U.S. Coast Guard said Wednesday afternoon that it had suspended the search for Teuber’s helicopter, and it offered its condolences to his loved ones.

“After an extensive search with our available assets resulting in inconclusive findings, it’s with a heavy heart that we have to suspend this search pending any new information. I offer my deepest condolences to those affected by this incident,” the statement quoted Cmdr. Matthew Hobbie as saying.

The Coast Guard found wreckage from a helicopter near Kodiak Island and was searching Tuesday night for its pilot, recently resigned health care executive Andy Teuber.

A flight record shows Teuber’s helicopter left Merrill Field in Anchorage at 2:10 p.m. Tuesday. The Coast Guard says Teuber was the only person on board.

He resigned last week as chairman and president of the Alaska Native Tribal Health Consortium. He resigned the same day from the University of Alaska Board of Regents.

He gave no reason for his resignations at the time. The Anchorage Daily News revealed Tuesday evening that his 27-year-old former executive assistant accused him of abusive treatment and coerced sex. Teuber described the relationship as consensual in an email to the paper Monday.

Teuber is 52. He is listed in state records as the sole shareholder of Kodiak Helicopters LLC, which owns the missing helicopter.

The black and white Robinson R66 was last seen northeast of Kodiak. A family member told the Coast Guard Teuber intended to fly to the island that afternoon.

The search for Teuber is continuing Wednesday, with both an MH-60 helicopter from Kodiak and a Coast Guard cutter, she said. 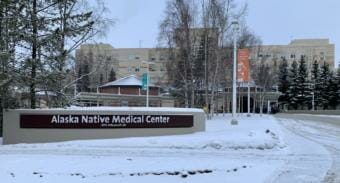 Andy Teuber has been ANTHC’s president since 2008, and he also serves as chief executive of Kodiak’s tribal health care provider, the Kodiak Area Native Association. Teuber sits on the University of Alaska Board of Regents, as well.