At 10 a.m. Saturday, Juneau’s urban avalanche forecast was for “extreme” danger. That’s a five on a scale that goes to five. The city’s emergency manager, Tom Mattice, said it was the first time he’d ever forecasted an extreme avalanche condition for Juneau.

It was also the first time since 2008 that the city was recommending people in the Behrends Avenue neighborhood evacuate their homes due to the avalanche danger.

The Behrends Avenue avalanche path runs down Mount Juneau on the side facing Gastineau Channel, near Juneau-Douglas High School. It’s obvious where the path is, especially in summer when you can see a distinct lack of trees. At the bottom of the path is three rows of houses.

“I knocked on 39 doors today,” said Tom Mattice from the city’s evacuation center on Saturday night. “Couple of them are on the edge of the avalanche path, but that’s how many I logged.”

He said most people are staying at friends houses or hotels.

“Several people have motor homes or boats or relatives in town,” he said. “We wanted to make sure that people had options.”

So, the city teamed up with the Red Cross and opened up Centennial Hall. There were only a few people registered shortly after it opened at 8 p.m.

One of the ballrooms was set up with about a half dozen white tents, each with a few cots inside so families could stay together and spread out from other groups of people for both privacy and COVID-19 safety.

“We’ve got wool blankets, fleece blankets and pillows in there for folks. There’s a shower house outside,” said Michelle Brown, a Juneau city employee and Red Cross volunteer.

Two officers with Juneau Animal Control were there, too, so that people could bring their pets with them, or even drop them off if they needed to stay somewhere pets weren’t welcome. They had a few cat carriers and some leashes at the ready.

“What we’re offering is holding people’s animals for up to ten days if need be free of charge,” said Jordan Bales. “Also vaccinating and applying treatments that they may need to keep them safe in the shelter.”

No pets were at the center at the time, but someone had stopped by to say his cat had run away in the avalanche zone. They filed a lost pet report for him and were hopeful the cat would be found.

The next day, the avalanche advisory was high, but no longer extreme. And there didn’t end up being any slides in the Behrends Avenue area. The forecast for Sunday was for colder temperatures and less precipitation, so even though conditions were right for large avalanches, Mattice wrote in his report that “we may have dodged a bullet for the time being on the big one.”

For now, that top layer of new snow, called the storm slab, doesn’t seem like it’s going to come down. It’s deep enough that an avalanche would reach the houses at the bottom of the Behrends Avenue avalanche path.

Underneath the storm slab is a deeper layer of snow from earlier in the year called the “persistent weak layer.” If that layer slid down the hill with everything on top of it, that avalanche would go all the way past the houses and Glacier Avenue and down to Gastineau Channel.

That persistent weak layer of snow is still there and Mattice says, it’s there under the snow throughout the whole region.

On Sunday, Mattice went up the Dan Moller trail on Douglas Island. He said he saw what he called 30 to 100 year avalanches — meaning big ones. The kinds that snap off branches and knock down whole trees.

There’s still significant danger in the backcountry and in urban areas and there’s more rain and snow in the forecast for this week.

This story was been updated on Sunday with the lowered avalanche danger. 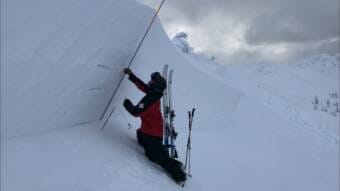 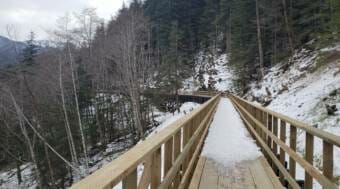 No injuries and no damage reported after avalanche on Mt. Juneau

Wednesday's avalanche forecast says winds are expected to gradually push snow off of high points and slowly reduce the risk of natural avalanches.