A fire destroyed Tuluksak’s only source of clean, running water on Saturday, and an emergency water delivery is delayed because of weather conditions.

Donated bottled water is ready to go out on the next plane from Bethel, but Tuluksak’s runway has been unusable because of snow. The man who usually plows it is in Anchorage being treated for COVID-19.

Tribal Council Secretary Kristy Napoka lives right next door to the water plant, where she works. It shares a building with the washateria.

Napoka watched as her husband went to put out the fire.

“When I looked out the window, my husband and a few other men were trying to get into the water plant and washateria,” she said. “They had to break the door, but they were a little too late. My husband did grab a hold of the hose. He was trying to turn the valve to get the water going, but the smoke was so heavy and he couldn’t stand there any longer.”

Eventually, Napoka’s family started hauling up water from the river with their snowmachine.

“They started splashing water into the fire, but it didn’t do any good,” she said. “It just kept getting bigger and worse.”

According to Alaska State Troopers, the fire burned from about noon until 4:30 p.m., destroying the town’s only source of clean, running water.

Now, residents will have to find other options. The Napokas have about 20 gallons of clean, drinkable water left to share between the nine family members in their household. They’ve been hauling water from the Tuluksak River for dishes and cleaning, but they’re not drinking it. In the past, residents have complained to the Alaska State Legislature about sediment making the Tuluksak River water unsafe to drink.

Villagers who don’t have potable water saved in their tanks will either need to haul water from the Kuskokwim River or ship in bottled water. 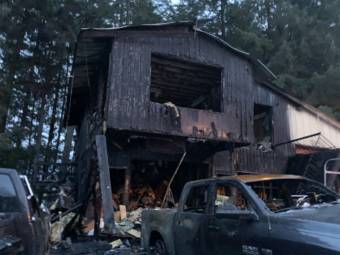 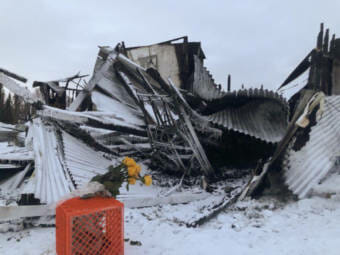 No one was hurt, but the fire completely razed the space. Investigators are still working out what caused it.