In the final moments of Donald Trump’s presidency, the federal Bureau of Land Management announced Tuesday that it has signed and issued leases for oil drilling in parts of the Arctic National Wildlife Refuge.

BLM Alaska spokeswoman Lesli Ellis-Wouters said the leases were signed on Thursday, just over a week after the first-ever oil lease sale in the Arctic refuge was held.

Issuing the leases was a priority for the administration, said Ellis-Wouters.

But critics have blasted the administration for rushing to lock-in oil leasing in the refuge at unprecedented speeds before President-elect Joe Biden takes office on Wednesday.

The process to formally issue the leases — which includes an antitrust review — usually takes about two months, said Jenny Rowland-Shea, a senior policy analyst at the Center for American Progress, a liberal think tank

“We’re compressing a 60-day process, really, into two weeks, and that raises serious questions,” she said.

Biden takes office Wednesday and has said he opposes drilling in the Arctic refuge. Locking in the oil and gas leases could make it more difficult for his administration to reverse course.

The Arctic refuge lease sale was held on Jan. 6 and attracted just three bidders, the state of Alaska being the most aggressive.

The federal government said Tuesday that it has issued nine of the 11 oil leases that got bids. Two went to smaller companies and seven went to the state-owned Alaska Industrial Development and Export Authority.

The state authority was also the highest bidder on the remaining two leases that have not yet been issued.

“I can say that we’re only issuing the leases on those we have received the required paperwork for,” Ellis-Wouters said. 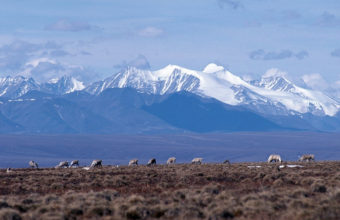 The U.S. Interior Department said there would be no searching for oil in the Arctic National Wildlife Refuge this winter because Kaktovik Iñupiat Corp. failed to meet a key deadline. In a strongly-worded statement Thursday, KIC said the Interior provided a “blatant mischaracterization” of what happened.

President Joe Biden imposed a “temporary moratorium” on all oil and gas leasing activities in the Arctic National Wildlife Refuge shortly after taking office on Wednesday, citing the “alleged legal deficiencies underlying the program” and the inadequacy of a required environmental review.

The state won 10-year oil leases for nine pieces of land by submitting the minimum offer: $25 an acre. But drilling for oil in the refuge is expensive, and it faces an aggressive opposition campaign.