Presidents Trump’s false claim that he won the 2020 election has divided Republicans in the U.S. Senate into three camps.

Sen. Lisa Murkowski is among those who say they’ll affirm Joe Biden’s win when Congress counts the Electoral College votes this week.

“The courts and state legislatures have all honored their duty to hear legal allegations and have found nothing to warrant overturning the results,” she said in a written statement Saturday.

She issued a second statement Sunday, with senators of both parties (and Angus King, I-Maine) saying the voters have spoken and all legal challenges have failed.

“At this point,” the statement says, “further attempts to cast doubt on the legitimacy of the 2020 presidential election are contrary to the clearly expressed will of the American people and only serve to undermine Americans’ confidence in the already determined election results.”

Murkowski is among 19 Republicans in the election-affirmation camp, according to the Washington Post’s tally.

So far, a dozen senators are heeding Trump’s call to fight the election results.

Alaska’s Dan Sullivan is among 20 Republican senators who haven’t declared themselves with or against the Trump loyalists. Sullivan acknowledged Biden as president-elect in mid-December. He has hasn’t proclaimed a position since Sen. Josh Hawley, R-Mo., kicked off the opposition last week, ensuring the Senate will debate the Electoral College results.

Alaska Congressman Don Young was among the first Republicans in Congress to acknowledge Biden’s win in November. 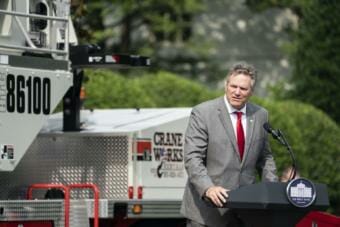 Gov. Dunleavy believes President-elect Biden has ‘outside chance’ of becoming next president

"President Trump has had the opportunity to litigate his claims, and the courts have thus far found them without merit," Sen. Lisa Murkowski said in a statement.

Trump wanted to stop the vote when he was ahead. Alaska’s congressional delegation urges patience