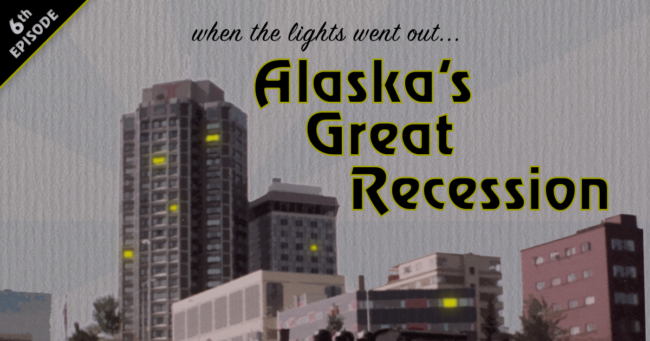 Less than ten years after oil started flowing, Alaska’s economy cratered. The recession was quick and deep. Ten banks failed, real estate values plummeted and tens of thousands of people fled the state. It was Alaska’s great recession, 20 years before the rest of the country went through almost the same thing.

Eating out wasn’t just a quick bite for Pete Zamarello. It was a sacred time when dreams were sketched in notebooks. He amassed an empire over plates of Italian or Mexican — Pete’s favorite foods.

He liked to arrive at a restaurant with an entourage. And patrons would look up to catch a glimpse. This guy was an Anchorage celebrity. At least, that’s how Paul Gardner remembers it.

“When Pete walked into a restaurant, he didn’t wait for anybody to set him,” said Gardner. “He’d say, I don’t need your help, I can set myself!’ So he’d pick any table and they’d just have to deal with him.”

Paul dealt with Pete for decades. First as an employee and later, a friend.

Zamarello died about three years ago and Paul is now the trustee of his estate.

When Pete was alive, he owned this place. And back when oil was booming, Pete shaped the landscape of Alaska’s largest city, Anchorage. But he grew up on the island of Cephalonia, which is a part of Greece.

When Pete first arrived in Alaska in the 1960’s, he made money buying and selling oil leases. Then he sold a few houses. And by the 1970s, he turned his sights to strip malls. People called him ‘The Stripmall King. And Pete? He wasn’t offended

Pete Zamarello wore thousand dollars suits paired with cheap shoes. All bushy sideburns and big sunglasses. You could catch him driving around town in a blue Lincoln Continental.

But Pete built an extravagant lifestyle on top of a shaky foundation — the conviction that Alaska’s oil boom would never end.

“He was the first time I ever heard someone say I was too big to fail,” said state economist Neal Fried. “That term wasn’t invented just recently in that last Great Recession. He was saying, ‘I owe the banks so much there’s no way they’re going to close on me’.”

Alaska Mutual was just one of the financial institutions that loaned Pete Zamarello money. Kevin Tune worked there. He was in his late-twenties at the time — with a mustache and a rattail haircut. He tucked his eight inch tail of hair into the collar of his suits.

Tune wasn’t a lending guy. He was a bank auditor. But he saw some of the loans that went out the door. And he remembers by the late 70s, it was kind of bonkers.

“I actually saw loan documentation on bar napkins in files,” said Tune. “And I thought this is unbelievable. You’re lending on a financial statement created on a bar napkin from Chilkoot Charlies.”

Tune says more than a dozen banks in Anchorage were competing for customers. They cut deals, like allowing them to have no down payment.

In the heyday, Pete Zamarello was borrowing from at least 15 different banks.

Then in the first half of 1986, the price of oil crashed- it fell nearly 70 percent. That combined with the overbuilt real estate market in Anchorage, caused the state’s economy to suddenly fall off a cliff.

Newspaper articles from the time describe the housing market in freefall and condominium complexes as ghost towns, as owners abandoned their properties.

“During that time it looked really, really bleak,” said Gardner. “Pete was telling me that he had tenants coming in and just dropping the keys on his desk and leaving because they couldn’t make it anymore.”

In 1986, Pete Zamarello filed for Chapter 11 bankruptcy. He was about $150 million dollars in debt — owing hundreds of creditors.

Kevin Tune says Alaska Mutual was also struggling. The bank relied heavily on real estate lending — loaning to commercial developers like Pete Zamarello and also regular homeowners. It was a great business to be in during the boom years. But as business owners defaulted on their loans and homeowners started handing in their keys.

It was a busy time for the Federal Deposit Insurance Corporation (FDIC). The agency helped work out a deal for Alaska Mutual to merge with another bank in an effort to keep the bank’s doors open. But it was still at risk of being shut down by the FDIC. So at the end of each week, Kevin Tune sat back and waited.

Tune and his colleagues were asked to return to the bank on a Saturday, while the FDIC went through the bank’s numbers. It was much worse than they thought.

The FDIC had a small office in town already. But this bank failure called for a much bigger presence in Anchorage. So the FDIC moved into a large glass office building in midtown. And there was a bright side.

“They hired virtually everybody back,” said Tune.

He and his colleagues had new jobs with the FDIC. Because who better to try to get rid of bad loans than the very people who helped create them?

“I don’t think that ended up being any sort of problem but its an interesting dynamic when you have people collecting on a loan that they did,” said Tune.

When it was all over, the FDIC ended up closing ten failed banks in Alaska.

The state economy started growing again in late 1988. But the real estate market took much longer to recover. Since those days, the economy chugged along, growing modestly for nearly 30 years. But things have changed. We’re now in our first recession since the 1980s.

In some ways it’s the same old story: The price of oil dropped dramatically in 2015, which meant billions of dollars in state revenue vanished. The oil industry has lost thousands of jobs.

But Neal Fried says what’s happening now is not the same.

“I mean there’s just monstrous difference between now and then,” he said.

In the early 80s, there were way too many condos and houses being built. Right now, Anchorage has a tight housing market. And nearly two years into the recession, prices are flat.
The population is also a lot more stable. Back then, the median age in Alaska was 26. When things got bad, people picked up and moved. That’s not as easy for most residents today.

Another key difference? Alaska has a lot more savings in the bank.

But here’s the thing: This time, it’s not a classic oil town bust. Alaska’s recession now is a lot less predictable. Even if the price of oil jumps again, it won’t save the state’s economy because there’s a lot less oil in the pipeline.

“And these are sort of uncharted waters, which does create uncertainty,” said Fried. “I mean if this is just a classic boom bust. I wouldn’t be worried about it at all.”

When he was going through the airport security line in Anchorage recently, a TSA agent pulled Fried aside and asked him if he should buy a house. It’s a question he gets a lot these days.

He told the man the same thing he tells everyone who asks — it depends on your situation.

“I’m generally a pessimist,” he said, “But what I do know, since I’ve been doing this long enough, is that the optimists typically have been right more often than the pessimists, and that gives me some optimism.”

He says it’s impossible to say what the future holds for Alaska’s economy. But the state learned a humbling lesson during the 80s bust. There’s a difference between being an optimist and believing you’re too big to fail.