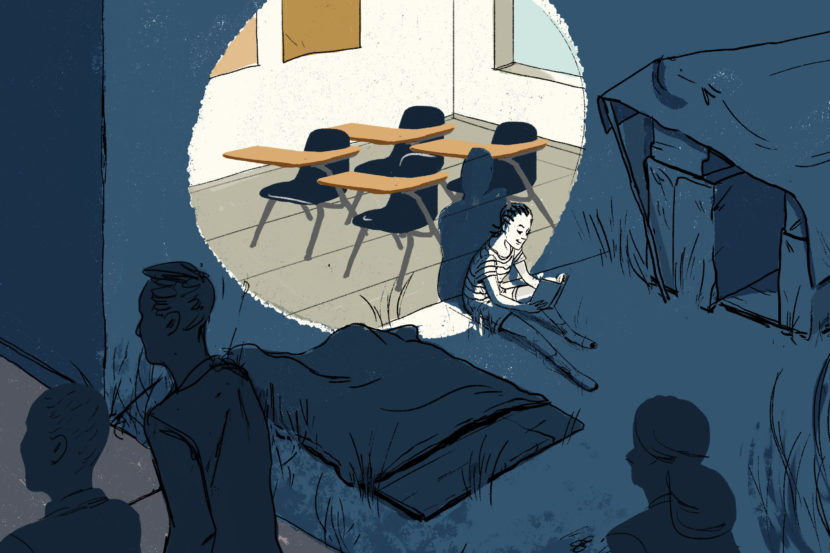 When Caitlin Cheney was living at a campground in Washington state with her mother and younger sister, she would do her homework by the light of the portable toilets, sitting on the concrete.

She maintained nearly straight A’s even though she had to hitchhike to school, making it there an average of three days a week. “I really liked doing homework,” says Cheney, 22, who is now an undergraduate zoology student at Washington State University. “It kept my mind off reality a little bit.”

More than 1 million public school students in the United States have no room to call their own, no desk to do their homework, no bed to rely on at night. State data collection, required by federal law and aggregated by the National Center for Homeless Education, shows the number of homeless students has doubled in the past decade, to 1.3 million in 2013-2014.

A new report by the nonpartisan advocacy group Civic Enterprises brings the voices of these students to life.

“I’ve been working on the dropout problem for more than a decade,” says co-author John Bridgeland. “I discovered homelessness wasn’t on our radar screen and it wasn’t on others’ radar screens, notwithstanding this 100 percent increase.”

But the Every Student Succeeds Act, or ESSA, includes both new mandates and some extra money to assist districts in helping more students like Cheney.

The challenge starts with finding them. As other research has shown, students with insecure housing aren’t all living in shelters. They may be doubled up with relatives or moving frequently from place to place. And they may be housed with their whole families, or going it alone.

This study relied on interviews with 44 currently homeless youth and a survey of 158 more who were homeless at some point in middle or high school.

Ninety-four percent reported staying with different people such as relatives or friends, and 44 percent stayed in a hotel, while half had spent some nights in a car, park, abandoned building or a public place like a bus station. Often, schools have a practice of asking for proof of residence only once at enrollment, which doesn’t capture transitions or instability.

A second issue in identifying these students is stigma. Two-thirds of the students in the study said they were uncomfortable telling people at school about their situation.

That was the case for Cheney. “I knew that there was a good chance my sister and I would be separated in the foster system,” she recalls. “I couldn’t allow that to happen. I got the message from my mom that I shouldn’t be telling people at school, and I should try to resolve my issues on my own.”

Both resources and red tape can be barriers in the way of helping these students. But on the bright side, says Bridgeland, “We’re looking at schools as a hub for connecting students and families to housing, mentoring, tutoring, mental health and other services.”

For nearly 30 years, a federal law called the McKinney-Vento Act has been meant to ensure that homeless students have the same access to school as anyone else. The law requires that each school district designate a liaison to ensure enforcement.

This report surveyed 500 of those liaison staffers and found, however, that 90 percent are effectively moonlighting, spending less than half of their time on duties related to identifying and helping homeless youth. At the same time, only 36 percent of liaisons reported that they work “a great deal” with community organizations, which would be presumed to be the best way to connect families with the housing and other services they need.

Maybe that’s why just 1 in 4 of the youth surveyed, and 29 percent of liaisons, said that schools did a good job connecting students with housing, their stated top priority. Among the youth, 58 percent said that their schools “should have done a lot more” or did a poor job.

“When I see a finding like that I freak out that this is so bad,” says Bridgeland. “But the action-oriented part of me says, wait a minute, here’s where the opportunity is.”

Bridgeland and Civic Enterprises are part of a network of organizations that have been heavily involved in efforts to bring down the high school dropout rate, which has fallen significantly in the past decade. Bridgeland says homeless youth are going to be their next major area of effort.

First of all, the numbers, which have doubled, are likely to grow even bigger thanks to better reporting under new ESSA requirements. Under the federal law, districts must perform outreach to housing-unstable students multiple times during the school year, post public notices of homeless student rights and, most significantly, they must break out high school graduation rates for homeless youth.

Other changes in the law that are likely to focus public attention have to do with how easy schools make it for homeless youth to continue their education despite disruptions.

About half of homeless youth in this study reported having to change schools in the middle of the year. Bridgeland says it’s been common for paperwork requirements like proof of residence to keep students out of class for up to a month.

But with modern data systems, ESSA now requires schools to put students in classes immediately and contact their previous schools for records. Schools must also help homeless students make up work and come back to school regardless of absences.

Another significant issue, of course, is money. ESSA includes a 20 percent increase in funding for McKinney-Vento enforcement. Money will now be set aside from Title I funding to help attract, engage and retain homeless students. There will also be money to train more front line school staffers, from teachers to cafeteria workers and bus drivers, to recognize and help homeless youth.

But money isn’t the only solution. Just over half — 54 percent — of the formerly homeless youth surveyed in this report said both material and emotional support are equally important to helping them continue their educations.

Caitlin Cheney says school was “a solace” for her. Besides her grades, she excelled in extracurricular activities like ceramics and a board-game club, but she said she could have used more support.

“I just wish that when kids are falling asleep in class or unable to do some assignments, or spending more time in lunch eating their only meal of the day, that teachers would ask what’s going on,” she says. “I wish that more teachers had more compassion for some of the situations that students might be going through.”

Bridgeland says the centrality of school for many homeless young people is a sign of their resilience that gives him hope. In the interviews, he says, “there were [stories of ] kids begging their parents or guardians to let them stay in their home school, or let them back in or make sure they could get a ride.”