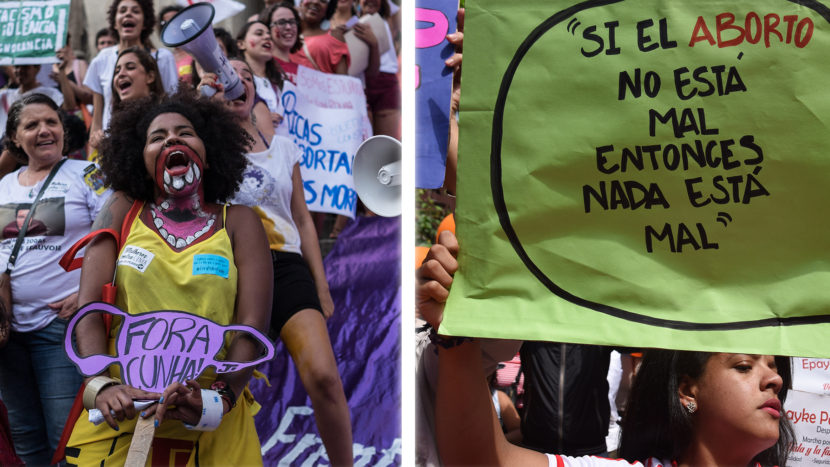 The mosquito-borne Zika virus has sparked a debate about abortion in both Latin America and the United States.

The virus has been directly linked to a birth defect that results in an abnormally small head and brain damage. In Latin America, where many countries have strict bans on abortion, some citizens and government officials are asking whether such bans should be reconsidered, at least in infected mothers.

And in the United States, a decades-old discussion has been reignited: Should the country rethink its stance on funding abortion initiatives abroad, put forth in what’s known as the Helms Amendment?

Adopted in 1973, the Helms Amendment states that “no foreign assistance funds may be used to pay for the performance of abortion as a method of family planning or to motivate or coerce any person to practice abortions.” In layman’s terms: Groups working with reproductive issues around the world cannot get U.S. government aid to fund abortions. In 1984, President Ronald Reagan went a step further with the “Mexico City Policy”: U.S. aid cannot go to foreign clinics or groups that ” actively promote abortion,” regardless of whether they do it with money from non-U.S.sources. This policy has been implemented by Republican presidents since and reversed by Democrats, including President Obama in 2009.

If the Helms Amendment has always been controversial, the ongoing Zika outbreak has only added fuel to the fire. Those who oppose the amendment argue that USAID funding of abortions could help provide access to safe procedures for pregnant women who are affected by the virus and who might choose to terminate their pregnancy. Democratic candidate Hillary Clinton has said she will work on adding exceptions to the Helms Amendment, and candidate Bernie Sanders has said he would fund global abortion providers by executive action.

The debate about Helms is as old as the argument about legal abortion in America itself. The amendment was, in many ways, a reaction to Roe v. Wade. Following the ruling that legalized abortion, conservative lawmakers rushed to introduce measures to curb access to abortions nationwide despite the Supreme Court ruling. They also found a foreign policy champion in North Carolina’s Republican Sen. Jesse Helms. One of his first orders of business abroad was reproductive health. Sworn into office January 1973, the same month that the Supreme Court issued its ruling on Roe, he sponsored an amendment to the Foreign Assistance Act, prohibiting any U.S. foreign aid from going toward abortions.

The proposed amendment was met with plenty of resistance, including from USAID, which argued that it was hypocritical given the change in the U.S.’s own stance on abortion. The Foreign Assistance Act, USAID wrote, “explicitly acknowledges that every nation is and should be free to determine its own policies and procedures with respect to population growth and family planning. In contradiction of this principle, the amendment would place U.S. restrictions on both developing country governments and individuals in the matter of free choice among the means of fertility control … that are legal in the U.S.”

Nevertheless, the Helms Amendment passed in the Senate (50-42) and the House in June-July 1973.

Three years later, the Hyde Amendment stated that federal funds could not be used to pay for abortion unless the pregnancy puts a mother’s life in danger or is caused by incest or rape. Critics say this seriously limits access to abortions for lower-income women.

Supporters of abortion rights say that at the very least, the Helms Amendment should be interpreted the same way as the Hyde Amendment. “Women and girls who are threatened and raped should be able to get an abortion safely,” says Brian Dixon, senior vice president for media and government relations at Population Connection, a nonprofit that bills itself as “advocat[ing] progressive action to stabilize world population at a level that can be sustained by Earth’s resources.”

“Think of young girls escaped from ISIS in Iraq or raped in the Congo,” Dixon says. “We should be helping these women.”

Dixon has been vocal about the role of U.S. aid in the midst of the debate over abortion prompted by the Zika epidemic: “Let’s say Brazil changes its law to allow women with Zika to have abortion. Should we [Americans] help her get a safe abortion?” Dixon thinks the answer is yes: USAID should support clinics that perform abortions and family health/planning NGOs that advocate for them.

Wendy Wright, an anti-abortion activist since 1989, vehemently disagrees. “The United States should be promoting treatment, health and life — not death,” says Wright, who is vice president at the Center For Family And Human Rights, a nonprofit research institute that describes its mission as “dedicated to reestablishing a proper understanding of international law, protecting national sovereignty and the dignity of the human person.”

When Wright talks about the opposition to the Helms Amendment, she brings up racism, classism and discrimination. She says when American activists speak of the need to legalize abortion abroad “what underlies that viewpoint is that certain people, particularly the disadvantaged, are expendable and should be eliminated.”

She says her concern is not without precedent. History is filled with instances in which birth control campaigns targeted women of color and the lower classes, in America and abroad. One of the more prominent cases in Latin America was the forced sterilization of poor indigenous Peruvian women, in the mid-1990s. At the time it was argued that a lower birth rate would lower poverty.

Shawn Carney, president of 40 Days For Life, an international nonprofit that campaigns against abortion throughout South America and the world, puts it more bluntly. Over the phone from his office in Texas, he says: “A First World country goes into a Third World country and says, ‘We don’t think you should have this many children, or children at all, because you’re poor and you have diseases, and you don’t have our lifestyle.’ ”

Wright also stresses that funding abortion is not a good use of aid. “When abortion gets in the mix and we start talking about eliminating the Helms Amendment, aid will be diverted away from treatment and prevention, like insecticides, medicine, labs … the very things that could help people on the ground throughout their life span.”

But for the time being, the debate over whether the U.S. should fund abortion providers in Zika-affected Latin America might be moot. Regardless of whether the Helms Amendment stands or is modified, abortion is for the most part banned in Latin America — and often carries serious punishment. Whether the tiny Aedes aegypti mosquito that carries Zika will nudge an entire continent’s stance on abortion remains to be seen.