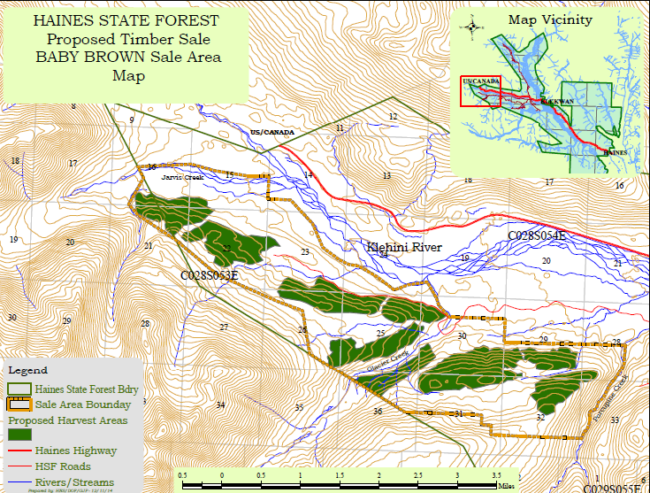 A proposal for the largest potential timber sale in the Haines State Forest in 20 years is up for public comment until the end of this week. The 1,000-acre sale has a diminutive name: Baby Brown. It’s located on nine pieces of forest in the Klehini area between Porcupine and Jarvis Creeks, about 37 miles northwest of Haines.

Why is the State Division of Forestry pursuing such a large timber sale in the Haines State Forest now? Northern Southeast area forester Roy Josephson says interest in a smaller, 145-acre sale called Glacier Side 2 is what prompted the proposed Baby Brown sale.

Josephson says there were a couple people interested in Glacier Side 2. But one of them said, in order to operate in Haines, they want more area available for logging. If they’re going to invest money and effort to get here, they wanted the trip to be worth it.

“If somebody purchases the Glacier Side 2 sale and it goes well for them and they make a buck, I think they’re gonna be interested in the next sales that we put up in the area,” Josephson said.

Glacier Side 2 and another earlier sale area called Glacier Side 1 are included in the 1,000-acre Baby Brown sale. It’s made up of 200-year-old Sitka spruce and Western hemlock.

“I see us converting an over-mature forest into a young, vibrant forest growing trees again,” Josephson said. “It provides timber to the timber industry, thus helps our economy and makes our forest healthy again.”

Josephson says the trees in the Haines State Forest are afflicted with remnants of infestation and rot.

“Our timber’s not very good,” he said. “We had a spruce bark beetle infestation starting in about 1989 which killed a lot of value in the forest.”

Josephson says “more than three” people have expressed interest in Baby Brown. None are local, but they are all U.S.-based. If the sale were approved, it could go to one or multiple buyers.

“Lynn Canal Conservation has never had a problem with small sales to supply local people with firewood and building materials,” said Eric Holle, president of Haines-based Lynn Canal Conservation. “But when they get up to 100-plus acres you start to see bigger impacts. The fact that this could total up to 1,000 acres really sent up the red flag,” Holle said.

Holle is worried about the impact building new logging roads and clear-cutting so much old-growth forest would have on wildlife. He says it could cause runoff that would damage fish habitat.

Jackie Timothy at the Department of Fish and Game Habitat Division says there are rules the timber industry has to follow when operating on public land. She says those rules would prevent that kind of damage from happening. For example, there needs to be a 100-foot no-logging buffer around fish streams.

The Division of Forestry’s preliminary best interest finding, written by Josephson, says in addition to fish streams, the sale area is used by moose and bear and possibly other animals such as wolves and birds.

The report estimates the total statewide economic impact of the Baby Brown Sale could be $2 million, including $300,000 in royalties to the state.

It says the timber sale could generate 20 jobs and boost local businesses that would supply loggers with fuel, food, housing and medical services.

Another concern is visual impact. Some of the Baby Brown sale areas can be seen from the Haines Highway. The highway is a designated national scenic byway. Local borough assembly member Ron Jackson brought up the question of whether clear-cutting in viewing distance from the highway could impact that designation.

“If it all went out tomorrow, it would a pretty strong visual element on the landscape there,” Jackson said.

“You can’t hide every single sale,” Josephson said. “At some point the timber in the viewshed will have to be harvested.”

Josephson says the Division of Forestry would design the timber sale units to make “the least impact on the viewshed as possible.”

“If it looks bad, it probably is bad,” said Holle. “And it certainly doesn’t help businesses reliant on nature and an intact environment to have a heavily clear-cut valley.”

If the Baby Brown Sale goes through, it would be a timber sale of a size Haines hasn’t seen since the 1990’s. But Josephson says even if the sale is approved, he’s concerned the quality of the timber might be so poor that no buyer would actually commit.

The public comment period on the proposed sale is open until Friday, February 6th. The Haines Borough, highway residents, Lynn Canal Conservation and the Alaska Department of Fish and Game plan to submit letters with their viewpoints. The Division of Forestry will consider the comments in its final best interest finding on whether to pursue the sale.