If everything goes right, former Bethel resident Rebecca Trimble will be an American soon.

It’s a moment that has taken years to reach, but her husband, John Trimble, a captain in the U.S. Army Reserve, said that they’re waiting for a final decision before they celebrate.

“You know, like, we’ve gotten so hopeful so many times along the way and then been disappointed, you know,” he said. “So now it’s, I mean, I don’t know, that’s just how I feel about it. It’s like it’s definitely exciting, but it’s, but we’ve kind of trained ourselves to not get too, too excited.”

Trimble’s story made national headlines in 2020, but it has been slowly unfolding for more than a decade. She’s been in the U.S. since she was a few days old.

“I was adopted at birth in Mexico. And then I came up from, like three days on up, to Salem, Oregon, and that’s where I grew up,” Trimble said. “Later on, in middle school, I moved up to Vancouver, Washington. I lived in Vancouver until 2017, when we moved to Alaska for my husband’s job.”

Trimble said that she didn’t know she wasn’t legally a citizen. She even voted in the 2008 presidential election, which is illegal for a non-citizen. This caused a lot of problems when she found out she wasn’t a citizen and started looking for legal ways to stay.

“There’s been so many ups and downs and dead ends where we’re like, ‘oh, connect with this person or do that paper. Let’s try this.’ And it’s just been a whirlwind,” she said.

Trimble first told her story to the Alaska Landmine in early 2020 after she received a letter from the U.S. Citizenship and Immigration Services saying that she had a month to leave the country. That was hard on her husband and her kids.

”They saw the hurt, and they saw me crying, and they kind of, we kind of tried to explain in the, like, soft way, how, you know, ‘Mommy was adopted.’ And you know, there’s just papers and that makes you like, who you are, where you’re born, and just like, ‘Mommy might not be here,’ you know. ‘We might have to move,’ kind of thing,” she said.

Trimble’s situation is tricky, and she said that trying to find a way to get immigration officials to understand that felt dehumanizing.

“I didn’t get approved one way because of this. So we filed a paper the other way. Then they’re like, ‘no, because we feel like you don’t fit in this way either.’ And then no one had taken the time to talk to me, and it was like ‘mail this in, and three months later you’ll hear a response to that question.’ I felt like a number at times. And if I didn’t fit that number, then, you know, then it didn’t move forward,” she said.

In 2019, the Trimbles hired Margaret Stock, an immigration attorney in Anchorage.

“The facts of Rebecca’s case are very sympathetic. I think most people understand that when you came to the United States when you were a few days old and you thought you were an American citizen your whole life, that it’s not fair for the government to come forward when you’re an adult and tell you that you need to be deported,” Stock said.

But in the end, it took a literal act of Congress to get results. Alaska’s congressional delegation had to push a private bill through Congress specifically for Trimble. A private bill allows individuals to get relief directly from federal lawmakers when they’ve exhausted all of their other options. Many of them deal with immigration. But even with high-level support from Alaska’s delegation, it has taken more than a year for that bill to work its way through the House and Senate.

Trimble’s case is unique in some ways, but the circumstances are deeply familiar to hundreds of thousands of undocumented people living in the country.

“We know the story of so many, who we refer to as the Dreamers. Young people who came into this country and very, very young, knowing no other country other than the United States, brought here by their parents, and who have been denied opportunity,” said Alaska Sen. Lisa Murkowski who sponsored Trimble’s bill in the Senate.

What’s rare about this case is that her private bill actually made it through Congress.

“But Rebecca Trimble came to us as, as really, a very special case,” Murkowski said.

Stock, Trimble’s attorney, deals exclusively with immigration cases. She said that she’d like to see a legislative fix to this problem.

“I think it’s really important for people to know about cases like this — they’re not actually that uncommon. So to help the rest of the people, I think, though, we’re gonna have to get immigration law changed,” Stock said.“Because one of the problems with private bills, of course, is they only benefit one person and they don’t fix the general laws.”

Trimble’s bill passed the Senate unanimously on Dec. 15. Now she’s waiting for President Biden to sign it, but that doesn’t mean she’s done with all of the paperwork.

“So this will grant me, I believe, permanent residency, and then I’ll have to get a green card after that. And I know that’s, you know, that’s a long process as well,” she said.

And, once she’s legally able to, Trimble said, she’ll probably vote again — even though it caused so much trouble the first time around. 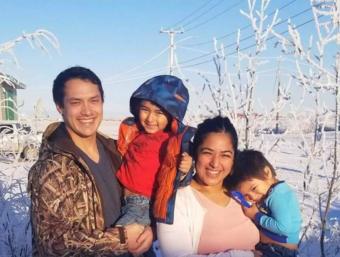 A resident of the US since she was 3 days old, a Bethel woman faces deportation for voting

Bethel resident Becky Trimble says she has lived in the United States since she was three days old. She didn’t know she wasn’t a U.S. citizen until she was 22.