There is only one species of abalone native to Alaska waters, and a new project is underway to try to find ways to boost its depleted numbers.

An Alaska Abalone Recovery Working Group is brainstorming ideas for strengthening the state’s vulnerable population of pinto abalones, also known as Northern abalones or, to the Indigenous peoples of the region, Gunxaa and Gúlaa. The working group includes representatives from state and federal agencies, tribal governments and others, including support from Alaska Sea Grant, a program based at the University of Alaska Fairbanks that provides marine education, research and technology.

That has started with surveys of people in Southeast Alaska where pinto abalones are part of Indigenous tradition.

The reception so far has been enthusiastic, said Ashely Bolwerk, the Alaska Sea Grant fellow leading the community engagement aspect of the project.

“Everybody I talk to is really excited about abalone, so it makes it a really fun topic to focus on,” said Bolwerk, who lives in Sitka and is working on a fellowship with the National Oceanic and Atmospheric Administration.

Pinto abalones are found as far south as Baja California and as far north as Southeast Alaska, but throughout the range, numbers have been sparse and uneven, according to NOAA Fisheries. That inconsistency extends to the Alaska populations. For example, the Sitka Sound population seems to be increasing, while abalones around Prince of Wales Island are hard to find, Bolwerk said.

In Lingít, Haida and Tsimshian traditions, pinto abalones are valued for their meat — and more. They were traditionally used for trade, and their shells are material integrated in artwork.

But scarcities have left some gaps in traditional practices and knowledge, Bolwerk said.

She was introduced to the subject as an offshoot of her research work as a graduate student working on a big project studying sea otter reintroduction off British Columbia. That led to work at Prince of Wales Island and a relationship with the tribal government in Hydaburg, where community members told her about the severe declines in their cherished resource.

“There are folks in Hydaburg who don’t harvest abalone anymore because they don’t see enough at their sites and are sort of self-managing,” she said. Some say they haven’t harvested in so long that they’re forgotten how to process the meat, she said. Additionally, “There’s a whole generation of kids who can recognize abalone shells in regalia and things like that but have no idea where the animal lives or what it looks like when it’s alive.”

Pinto abalones live for 15 to 20 years and reproduce slowly and in irregular patterns, making them inherently at risk for depletion, according to NOAA. The species is classified as endangered in British Columbia and Washington state, though NOAA Fisheries in 2014 rejected petitions to grant range-wide Endangered Species Act protections.

Overharvesting by people has gotten much of the blame for the recent declines across the range. Commercial harvests have been closed in various areas, including in Alaska in 1996, though some very small-scale subsistence and personal-use harvests continue in parts of Southeast.

People are not the only abalone eaters.  Sea otters have also gotten some of the blame for abalone declines. However, sea otters have an important place in the ecosystem, too, in eating creatures like sea urchins that could otherwise mow down kelp forests.

For the Alaska Abalone Recovery Working Group, the plan is for the survey element of the project to be completed in August, Bolwerk said. Results are expected to be presented to communities over the winter, she said. From there, the working group will consider potential rebuilding actions.

Possible responses include mariculture — either farming pinto abalones all the way to adulthood or a more limited project that would help restore wild populations, Bolwerk said.

Also possible are habitat improvements or changes to management of species that interact with pinto abalones. In British Columbia, for example, there is an effort to increase harvesting of sea urchins, which compete with abalones for kelp and seaweed, Bolwerk said.

Another idea is an educational campaign to raise the public profile of the multi-colored sea snails that crawl along the rocky seafloor. “Maybe some added emphasis on how important it is to local cultures and communities might help bring in more funding and create more awareness of the work that needs to be done,” Bolwerk said. 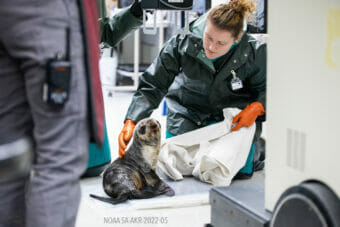