Bristol Bay’s sockeye run is the largest on record this season. It has been an astounding summer: More than 70 million sockeye have returned, and fleets have pulled in record harvests of more than 53 million fish.

Fish for Families is a new program that aims to share that catch. The program is an extension of the Alaska Longline Fishermen’s Association and the Alaska Sustainable Fisheries Trust. Since 2020, these groups have helped coordinate sockeye salmon donations from Bristol Bay to Alaska Native communities in southwest Alaska.

But the fish donations come at a cost. Those 8,000 pounds run about $64,000 to purchase, process and ship. They’ve gotten some donations and grants, but they’re also fundraising with a GoFundMe account to cover the other costs.

The group also wants to send salmon to communities on the Yukon and Kuskokwim Rivers that are facing record low chum salmon returns. That will require more funds. They’re asking the Alaska Department of Fish and Game for help shipping the salmon there.

Deenaalee Hodgdon fishes commercially and is helping to coordinate the salmon donations. Hodgdon, who is Deg Xit’an Athabaskan and Supiaq, said it’s important to look at the state as a community.

“How do we collaborate across our different regions, as Yup’ik and Sugpiaq people, reaching across to Dine and Tanana and Koyukon, all the way up into the border?” they said.

Part of doing so is trying to help people in other places who need salmon. It’s a central food source for people who live along the Yukon River. But in the past two years, multiple species have crashed to record lows, and people have struggled to catch enough fish to feed their families.

Serena Fitka, the executive director for the nonprofit Yukon River Drainage Fisheries Association, grew up subsistence hunting and fishing in St. Mary’s, along the lower Yukon River. She said the decline of the salmon runs has changed ways of life in her home village.

“The river was barren,” she said. “And it was sad, not seeing people gathered at their fish camps, not seeing the smoke come out of smokehouses.”

Fitka said the low numbers have been incredibly difficult to contend with. Last year’s chum run was a record low at under 200,000 fish. But these donations do help to feed people and further Southwest Alaska’s culture of sharing.

“With the efforts that are underway with sharing of the fish, our Native instincts, it’s ingrained in us to share our foods,” she said. “We’ve always shared our catch with people. And with another fishing region sharing their fish with us — it’s a great, great honor.”

The donations build off other efforts to bring salmon to communities in need in the past. In 2020, the fishermen’s association helped coordinate tribes, fishermen, local governments and Native organizations and nonprofits to donate fish from areas around the state, including from Bristol Bay and southeast Alaska. To date, the association said it has deployed $2.5 million to buy salmon and donate more than half a million meals.

Maio Nischkian, who fishes in Bristol Bay and owns a direct marketing company, works with the fishermen’s association. She said it’s important that people who make their living fishing in Alaska give back some of that wealth.

“We have a really big responsibility to share, not only with our local communities, but throughout the state,” she said. “Especially to Alaska Native communities that are struggling right now when, you know, they are the reason that we’re allowed to be here. And they’re the reason this fish has kept running.”

You can find out more about the seafood donations program at alfafish.org/seafood-donation-program

Correction: The first shipment of salmon donations was sent out at the end of June, not in early July as originally reported. 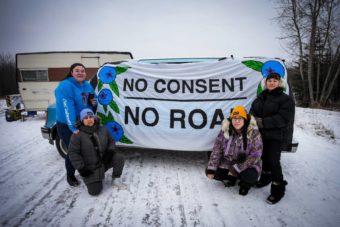