Alaska is short on health care workers — especially nurses and nursing assistants. Experts say increasing our reliance on out-of-state workers is economically untenable. But one big roadblock to training a homegrown workforce is hiring enough nursing faculty at the state’s university.

By the spring of 2021, Elmore was struggling to fill gaps in the schedule at Juneau’s Wildflower Court nursing home.

“We realized really quickly that within about six weeks’ time that we wouldn’t be able to operate at full capacity. And that’s when we had to close one of our wings,” Elmore said.

He said it’s an economic hardship for the small nonprofit to operate without all of its beds full. The closure resulted in a backup at the regional hospital as well. In February it was holding 11 patients who couldn’t find room in a nursing home, but didn’t require hospital level care any longer.

Elmore hired traveling nurses to partially reopen the closed wing, but Wildflower Court is still not at full capacity. He said he’d like to hire about a dozen nurses or certified nursing assistants, but no one is applying for the job openings.

“Our concern is this is just going to get worse,” said Jared Kosin, president of Alaska State Hospital and Nursing Home Association. “The only way to sustainably address it is to really train Alaskans and give them opportunities to enter the health care workforce and fill those jobs.”

He says not enough health care workers are entering the workforce. The pandemic only exacerbated a nationwide shortage. Alaska is already heavily reliant on out-of-state labor, called travelers. They’re more expensive to hire and less likely to stay in the state. As a result, Alaska has some of the most expensive health care in the nation.

Last month Kosin told legislators that from an economic standpoint, the state has to be able to develop its own health care workforce or those costs could go up even more.

“Our pipeline, and how we’re developing Alaskans to go and take health care jobs, is underperforming so severely, that we really can only go up,” he said. “We’re so bad right now, that we can only really improve.”

He says there is homegrown interest in health care education, but there’s a huge problem: the state’s biggest nursing program has to turn away two applicants for each one they accept.

“We get a lot more applications than what we have seats,” said Carla Hagen, director of the nursing program at the University of Alaska Anchorage.

She says academia doesn’t typically pay as much as being a practicing nurse, which is another challenge.

Nearly all of the school’s graduates get their initial licenses in state. Last month, most of the graduates from the university’s Fairbanks program went directly to work in a local hospital.

“Our mission is to try to provide that education and accessibility to nurses that will be staying in their own communities and, you know, building really that pipeline to meet the health care needs,” Hagen said.

There’s some forward movement. The state pledged $2.1 million dollars to the university to support nursing faculty recruitment and retention. Another nursing program at Alaska Pacific University was just nationally accredited.

Back at Wildflower Court in Juneau, Kirk Elmore says he’s glad that he got some financial help to attract traveling staff so he could open up a few more beds at the nursing home. But he says those workers are likely temporary and staff is still stretched thin.

“People are having to work more hours, overtime,” he said. “A lot of people are still postponing vacations and times to get away because they’re needed here to fulfill those vital roles.”

We passed an occupational therapist in the hall. It’s a challenge, she says, but there are a lot of big hearts in the building and everyone’s doing the best that they can. 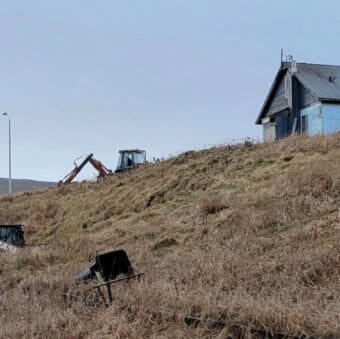 After nearly a month, running water restored to homes on St. George Island

After the loss of pressure in the water lines, city crew members scrambled to find the cause.