Alaska State Troopers say investigators located the mother of the newborn who was found New Year’s Eve in a cardboard box at a Fairbanks intersection.

Troopers say the mother, who is a minor, was brought to a hospital in the Fairbanks area for an evaluation and medical care.

“The investigation into the circumstances surrounding the baby being abandoned is ongoing, and no criminal charges have been filed at this time,” troopers wrote in an online dispatch.

Efforts to find the parents of a baby left in a cardboard box on a west Fairbanks street corner on New Year’s Eve continue.

Alaska State Troopers say they are pursuing all avenues, including DNA analysis, to find the family of the newborn — whose name is Teshawn, according to a letter left with the child.

The baby was found near a bank of mailboxes at the intersection of Dolphin Way and Chena Point Avenue. The note refers to parents who lived nearby on Cormorant Street, but troopers say the newborn may have come from a different location in town.

The note said the family could not care for the baby, who was wrapped in a blanket inside the box. Troopers say the child appears to have been found shortly after being left.

The child remains in good health and is being cared for by the state Office of Children’s Services. 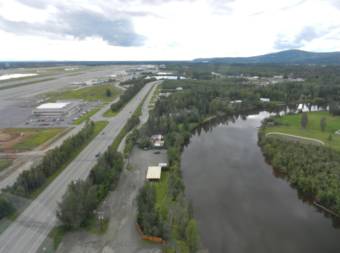 A Fairbanks woman said on social media that she found the child near her home on Friday and that a note left with the baby said the parents had named him Teshawn.