The Denali Park Road is now closed about halfway along its 92-mile length due to a landslide associated with permafrost melting.

A thawing rock glacier underneath a 100-yard section of the road going through Polychrome Pass is causing the road to slump. And the rate at which it’s slumping has increased in recent years, making it harder to maintain for bus traffic, the most popular way for visitors to access Denali National Park and Preserve.

Dave Schirokauer, the science and resources team leader at Denali, said road crews used to be able to keep up with it. But sensors buried in the landslide — measuring its movement every hour — recently clocked the slumping at 14 inches a day.

As the park continues to plan a long-term fix, Schirokauer said the road’s engineers nearly 100 years ago didn’t know about the rock glacier and almost certainly weren’t thinking about climate change. He recently spoke about the issue with Alaska Public Media’s Casey Grove.

Dave Schirokauer: In 1930, the road crew came up, and they kind of tickled this dragon. And so that disturbance of the road may have started the process of increasing the movement rate of this particular feature. And then, in more recent years, you throw in climate change — which across the region is clearly causing permafrost to warm and thaw — and it picks up in speed. So really, in a nutshell, it’s a combination of building a road on a potentially unstable slope and then throwing in climate change to really wake up that dragon and get it moving at what is now a pretty extreme rate.

Casey Grove: Was there ever a concern for the safety of the buses going through? Or was it more about just an inability to keep up with that slumping?

Dave Schirokauer: There’s a concern about rockfall from above as being probably the number one hazard for buses, vehicles, pedestrians and cyclists that are going through that area. As the road slips downhill, the slope above the road actually ends up getting steeper. So the amount of rockfall and debris flows that are coming from above down onto the road have increased. That’s somewhat mitigatable by a big ditch. And if you were to go out there late this season, or last season, you would have seen a giant ditch. And so we have a really nice rockfall catchment ditch that mitigates that to some extent — at least that rockfall hazard. As far as the slipping-down slope, even 12 or 13 or 14 inches a day, we don’t think that it’s just going to go and the whole thing is going to fall into the river and a bus is going to become entangled in that.

Casey Grove: Yeah, that’s interesting. That is what I was wondering, if there could be some big, catastrophic event like that.

Dave Schirokauer: It’s possible, but it’s pretty unlikely. What we’re seeing is just a real challenge keeping up with the maintenance. You know, having an industrial road for bus traffic is a little bit different than having like a four-wheel-drive road for a Jeep or something. So the grade and turning radius issues associated with a bus requires some pretty specific road specifications. And that’s what we’re aiming for when we maintain the Denali Park Road.

Casey Grove: Got it. So what’s the fix for this?

Dave Schirokauer: When we noticed this kicking up around 2018-2019, we realized that it might become unsustainable in the near future to just fill the gulch with gravel and grade the road. And I started brainstorming and thinking about what we needed to do. And recently there was a pretty deep dive into the geotechnical features of various alternatives. We looked at a north reroute and a south reroute and keeping the alignment in place. And we honed in on the idea that the best option — sort of in rough draft — was to consider building a bridge over the landslide. And so that’s where we are right now. We haven’t decided we’re building a bridge. But what we’re doing right now is a very deep dive into a geotechnical investigation, as far as the feasibility of a bridge. There’s a bunch of science work and cultural resource work, surveys going on. So that’s where we’re going. That process is going to occur this winter, probably into the spring. Hopefully by next summer we’ll have a clear path forward and we may be able to start work late next summer, or in the summer of 2023. 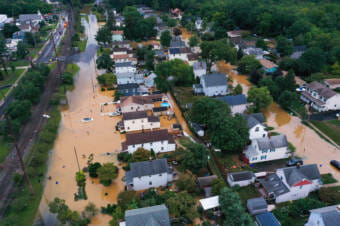 This year, researchers recorded the biggest bloom they’ve ever seen.