The motion to intervene, by Attorney General Treg Taylor, comes in a case called Juliana vs. United States.

The 21 plaintiffs in the case, who filed their lawsuit in Oregon, allege that federal government promotion of fossil fuels and the lack of policies to reduce them violates their constitutional rights. And they’ve asked the courts to require the federal government to draft plans to phase out carbon emissions.

A divided federal appeals panel ruled last year that the activists made a compelling case, but that it had to be made to elected officials rather than to the courts.

The plaintiffs and the federal government are now fighting over whether the case should be dismissed, or allowed to continue on a narrower basis. Instead of asking the courts to force the federal government to draft an emissions reduction plan, the activists are now asking for a simple declaration of their constitutional rights, said Andrew Welle, one of their attorneys.

A spokeswoman for Taylor, Grace Lee, wouldn’t directly describe the attorney general’s position on carbon emissions. But she said in an email that Alaska’s involvement in the case is about how Congress and state Legislatures are the right avenue for addressing that policy question — not the courts.

“That is why we have a democracy where we elect our representatives, who then struggle with these difficult questions where you have to balance economic prosperity, responsible resource development and impacts from a changing climate,” Lee said.

Welle was skeptical of Alaska’s separation of powers argument, noting that the states, in their filing, made multiple references to the likelihood that the litigation could change the federal government’s energy policy.

“It’s pretty clear from the state’s papers that this is not about saying, ‘Let the states handle this,’” Welle said in a phone interview Thursday. “It’s about them protecting their continuing promotion of fossil fuels and opposing any movement on those issues.”

Of the 16 states joining Alaska in the filing, all but one are led by Republican governors, and many — like North Dakota, Texas and Louisiana — depend on the oil and gas industry. They contend that upcoming, court-ordered negotiations between the activists and the Biden administration could lead to a settlement that transforms the country’s energy system and violates principles like the separation of powers.

Dunleavy, the attorney general’s boss, has promoted Alaska’s oil industry and also disbanded a state panel charged with setting the state’s climate policy not long after he took office.

Welle said the states’ participation in the lawsuit is aimed at protecting their interests in fossil fuels and blocking movement on greenhouse gas regulation.

“If you look at the states that are involved in this litigation, none of them are making progress on climate,” he said. “They’re moving in the opposite direction, and continuing to throw fuel on the fire.”

Welle is also involved in a similar case that’s quietly been playing out in Alaska over the past few years.

In 2017, a group of young Alaskans sued the state and asked the courts to order the government to draft a plan to reduce Alaska’s emissions. A lower court judge dismissed the case a year later, but it was appealed to the Alaska Supreme Court.

Welle says his side has been waiting for more than a year and a half for a decision from the Alaska Supreme Court about whether the case can continue in the lower court — an amount of time he described as “extremely frustrating” given the plaintiffs’ argument that “we’re in a climate emergency now.”

A spokeswoman for the state court system, Mara Rabinowitz, noted that the Alaska Supreme Court justices asked for extra written filings after the oral arguments, which took an extra six months to complete.

“The court is carefully considering the important issues raised in the appeal,” she said. 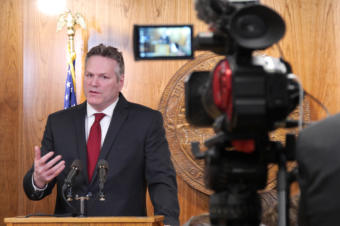 Alaska Republican Gov. Michael Dunleavy has formally disbanded the task force formed by his predecessor to guide the state's response to global warming.