A rare cascade of avalanches over the weekend has shut down the Hatcher Pass Road, and it will remain closed for several days as crews wait for conditions to stabilize before clearing avalanche debris.

Forecasters with the Hatcher Pass Avalanche Center say that five different avalanches crossed the upper stretch of the road, and one of those extended so far that it hit a second, lower stretch of the road, beneath a switchback. The center, in a Facebook post, said that was the first time such a slide had taken place since the 1980s.

Photos posted by the center show ribbons of avalanche debris covering the upper stretch of the road in several areas as well as massive piles of snow burying large stretches of Archangel Road, which is groomed for skiing and walking during the winter.

The Alaska Department of Transportation expects that it will take road crews at least three days to clear the debris, but as of late Monday, conditions were still too unstable to allow them to start working, said spokeswoman Shannon McCarthy.

The road had already closed Saturday evening, and officials don’t believe anyone is stranded in the pass, McCarthy said.

The road extends from outside Palmer through the Talkeetna Mountains and over the 4,000-foot Hatcher Pass — although during the winter, the pass is closed to travel and the road dead-ends lower down at a lodge and cross-country ski trails. Hordes of winter outdoor enthusiasts drive the road each week to ski, snowboard and hike.

Over the weekend, a foot of dense snow combined with stiff winds to help set off the avalanches. One of the slides was 300 yards wide and covered two different trails, the avalanche center said.

The road is now closed below Skeetawk, Hatcher Pass’ new downhill ski area, which means that the area will be largely inaccessible this week.

Cross-country skiers, at least, have ample alternatives not far from the pass, said Ed Strabel, a longtime trail groomer for the Mat-Su Ski Club. At Government Peak Recreation Area, near the start of the Hatcher Pass Road, Strabel said, groomers have had to cut down tree branches to allow them to operate their machine, which is called a Pisten Bully.

“Because the Pisten Bully cab is now hitting into the tree branches that were four feet above the ground before,” Strabel said. “We’ve got a tremendous amount of snow — we’ve had no meltdowns this winter whatsoever.” 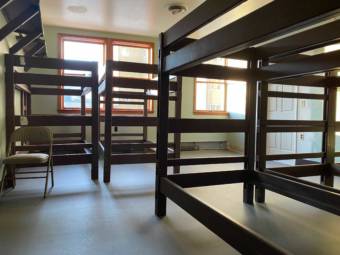 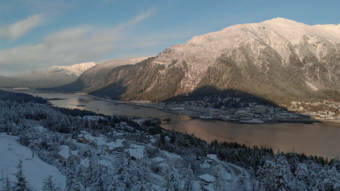 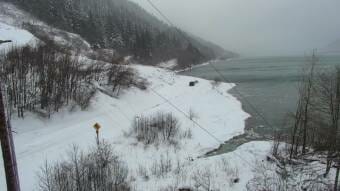 After a weekend of heavy snow in Juneau, forecasters warn of dangerously cold temperatures

A high wind warning is in effect until Monday evening. The National Weather Service forecasts winds with gusts up to 65 mph, which could bring down power lines and trees. The agency warns that travel could be difficult, especially for high profile vehicles.