It’s after work, and the summer sun and the tide are out at John Wright’s go-to fishing spot in Juneau: the wide, sandy beach where Sheep Creek meets Gastineau Channel.

He caught something too big.

A few years back, he says he started noticing someone showing up on the beach with a different hobby.

“If I recall correctly, my first years here, there were no dredgers here. And then one day, there was maybe one? And it just seems like, within a couple years there were many. And you know, I’ve just always been curious.”

The rafts themselves are made of pallets, wood and big foam blocks lashed together, about the size of a big mattress. The combination of improvised, DIY stuff and special gold-sifting gear probably ordered off the internet looks real janky, like something out of “Mad Max” or “Waterworld.”

The beach itself is pockmarked with unnatural pits about as deep as a bathtub.

The rafts are tied up to old pilings and big rocks that’ll be underwater when the tide comes in. They’re unattended, except for one. We head over so Wright can ask one of these DIY dredgers about what they’re doing.

“What if they don’t want to share their secrets?” Wright wonders aloud.

A pitbull named King is keeping watch around a fresh pit in the sand. His owner is in hip waders, spraying seawater from a hose into the pit. His name is Nathan Brooks, and he’s game to answer Wright’s questions over King’s protest.

“How much time do you think you spend out here, and is there a season?” Wright asks.

“Depends on the tides, really,” Brooks says. “The season is more when it’s warm, not so much the frozen ground. Other than that, it’s when the tides let us. You know, the best times is when the tide’s going out.”

Brooks’ raft is about 50 feet away in the water. One hose is running seawater up the beach to the pit. Another hose in the pit is sucking the slurry out and up to the top of his sluice box. He’s got it propped up on a float and some buckets.

We can’t see through the slurry, but the bottom of the box is lined with special mats with a bunch of little ridges. They’re supposed to trap tiny bits of gold and let the less-dense sand and pebbles run off.

Brooks has been out here all afternoon. He won’t know if he’s had a good day until the end.

“On a good shift, we can run an ounce a day, you know, if we catch both tides. We can pull an ounce out of the ground,” Brooks says. “I’ve pulled over 40 ounces out of here.”

Spot gold prices have spiked above $1,300 an ounce a few times this year. When the math catches up with our brains, all that comes out of our mouths is “Whoa!” and “Wow!” and some goofy chuckles.

“When I see this, I just see this big, kind fan of sand,” Wright says, looking across the beach. “What do you see when you look at this landscape?”

“I see money! That’s what I see when I look around,” Brooks says. “There is a payout, but it’s nice just being able to let my dog run out on the beach, and hang out here and just kind of do my own thing.”

He got into this hobby with his dad three or four years ago. King helps out too, pulling gear up the beach.

“He really does, actually. I hook him up to the end of it, he helps me pull the heavy thing back up, in and out.”

There are a lot of different rules around recreational mining. Some kinds require state permits, some don’t. Brooks says this spot is special, because if you follow the rules, you don’t need a permit, and unlike other spots, you’re not jumping on anyone else’s claim. The sand is special, too: It’s the pulverized tailings of a nearby mine that closed long ago, so there’s leftover gold.

Eventually, Brooks shuts off his pumps and wraps up for the day.

He points out some sand spotted with yellow flecks in his mats.

“Nope, that’s a mistake,” Brooks says. “People always think it’s real shiny, and that’s that pyrite. Which, there is pyrite in there, also.”

John Wright had a good day, too. He caught two Dolly Varden trout. But he doesn’t think he’ll be switching hobbies.

“No,” Wright says. “I think I’ll just stick with mine. Mine’s much more peaceful.”

For a profile of an especially colorful gold dredger, check out filmmaker Beau Sylte’s short film about Ray Rusaw from a few years ago. 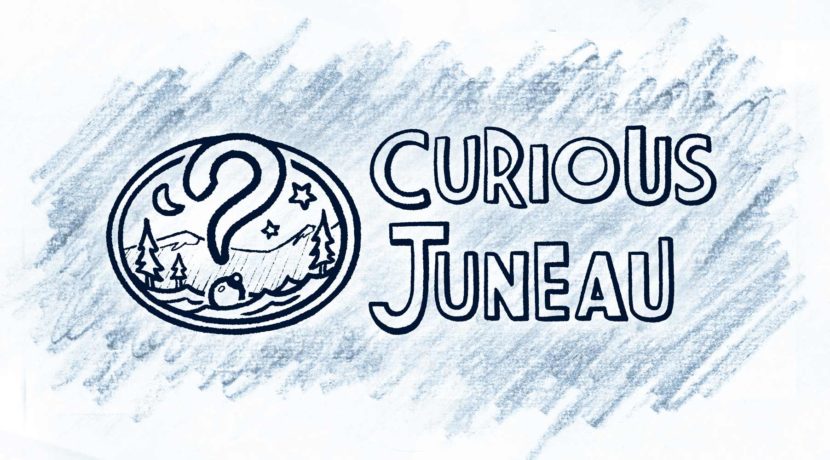 Have your own Curious Juneau question? Submit it here. You can also subscribe to the Curious Juneau podcast and catch up on past curiosities at ktoo.org/curious.