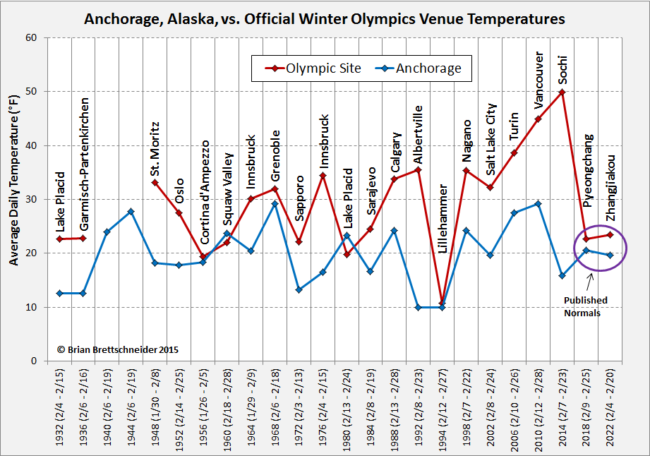 The winter Olympics in PyeongChang, South Korea feature a key ingredient: winter weather. That’s a departure from the last Olympic games in Sochi, Russia, where high temperatures strayed into the upper 50’s.

Brian Brettschneider, with our Ask a Climatologist segment, says PyoengChang is at about the same latitude as Washington, D.C. But he says the climate there this time of year is very similar to Anchorage.

Why is it so cold in PyeongChang?

They’re on the eastern part of the Asian continent and in the winter months they’re subject to the dominant Siberian high pressure system. That’s an area that gets very cold in the winter and they normally have winds that come out of the north. So they’re going to get a cold, dry flow coming in from Siberia and it’s going to functionally make them feel like they’re much farther north than they are.

Is it true that for its latitude, it’s the coldest spot in the world?

It basically is true. There are a couple of spots, like in Colorado that are at the same latitude or even farther south, at something like 11 thousand feet, that are going to be colder. But it really is, for its latitude, about as cold as you can get anywhere on earth.

How does the cold at this Olympics in PyeongChang stack up to previous Olympics?

It’s looking like it will be an average temperature of about 30. That’s going to put it as the coldest winter Olympics since Lillehammer, in 1994. The Sochi Olympics were famously warm, with highs near 60 and lows near 40. Before that, Vancouver was quite warm and even Salt Lake City was fairly warm. So you have to go back over twenty years to find a colder Olympics.