For the first time, a Tlingit name for a peak in Juneau will be included in the Geographic Names Information System or GNIS. This makes it possible for that name to be printed on federal maps and publications. Getting the indigenous name for a Juneau peak officially recognized actually began as an attempt to give the point a Western moniker.

To Lance Twitchell, the point east of Thunder Mountain has always been called Tlaxsatanjín.

“From the Tlingit prospective, nothing has really changed,” he says.

He’s the assistant professor of Native languages at the University of Alaska Southeast. In Tlingit, Tlaxsatanjín means “idle hands” or “hands at rest.” If you looked at a topographic map, the peak had been nameless.

“I think you’d see Heintzleman Ridge is what would be there. And that’s it,” he says. 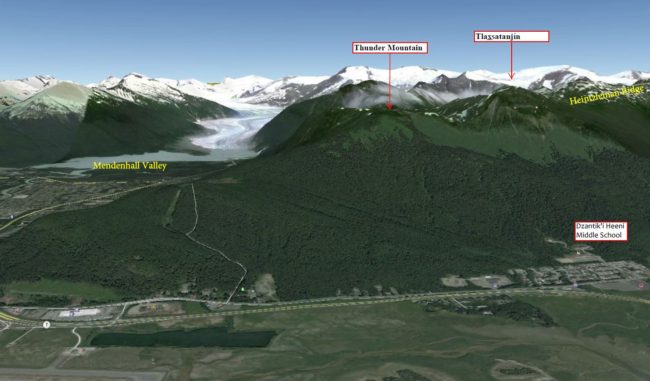 Twitchell wasn’t the only one who proposed a name for the peak to the Alaska Historical Commission. It almost became Mount Scribner, after the late Jon Scribner. He was a longtime Department of Transportation official in Southeast who died in 2005 in a hiking accident.

“He had sort of uncommon passion for the land here. For the people here,” says Mandy Mallott, Jon Scribner’s daughter. She’s non-Native.

“But I was adopted into the Kwaashk’i Kwaan clan out of Yakutat. And I was given a Native name, Ach Kwei,” she says.

Friends of the late Scribner submitted a proposal in 2013 to have the peak named in his honor. The commission approved it, unaware of its Tlingit name. That proposal was then sent to the U.S. Board of Geographic names, which also conducts a review.

The U.S. Board of Geographic Names added it to their list of things they would consider. But it didn’t take action. Then a proposal was submitted by Lance Twitchell. He says it wasn’t necessarily a counterproposal.

“It had nothing to do with the individual. It just has do with sort of reaching a capacity of saying, we can’t just keep naming stuff for people when these things already have names,” Twitchell says.

After Mallott found out about the peak’s indigenous name, she and her father’s colleagues withdrew their proposal.

“When we heard about the other proposal, absolutely very quickly did we decide that that was the name of that mountain,” Mallott says.

Mallott says she’s interested in seeing Native names being restored to the entire region. She believes her father would want that, too.

“His spirit would have been right there with us and that is to restore indigenous place names of this whole region. It’s not just this one peak,” she says.

Lance Twitchell says he hopes people will learn the Native names for these landmarks.

“So when they see that and they drive by that mountain, they can drive by and say ‘Tlaxsatanjín.’ And just look at it and think that’s what it’s been called for well over 500 years,” he says.

Tlaxsatanjín will be on federal maps starting next month.