More than 70 years have passed since the U.S. government forced the people of Atka from their homes to an internment camp on Killisnoo Island in Southeast Alaska.

To protect them from Japanese invasion during World War II, they were moved 1,600 miles from the Aleutian Islands to an old whaling and herring village across the water from Angoon on Admiralty Island.

They have not been forgotten. A group of Southeast Alaskans traveled to Killisnoo last weekend to memorialize the Aleut people of Atka.

While digging a hole for a memorial plaque, Martin Stepetin breaks down in tears. His wife, Ann, comforts him with a long embrace before he continues digging. He said he felt like he was digging a grave.

Stepetin is from St. Paul in the Pribolof Islands. His grandparents were evacuated in June 1942 and brought to an internment camp in Funter Bay, about 50 miles north of Killisnoo. His father was born there.

He has come to Killisnoo with about a hundred people on a Friends of Admiralty Island tour. Most are from Juneau, some are past and present Angoon residents.

Though Stepetin’s family wasn’t in Killisnoo, he feels a profound connection to the Atka people interned here.

“They’re Aleuts just like us and we’re related to them and they went through very similar hardships like we did and it changed our entire history,” Stepetin says.

Stepetin heard about the Funter Bay internment camp all his life growing up in St. Paul.

“The things that come to my mind are the stories of the babies that were born there and didn’t have the medical care to live and they were just babies and they died because they couldn’t be taken care of,” he says tearing up.

Stepetin now lives in Juneau and visited Funter Bay for the first time three weeks ago. When he heard about the Friends of Admiralty trip to Killisnoo, he immediately joined.

“Coming here is the closest thing you can do to paying your respects. It’s the ultimate way for me to put closure on it,” Stepetin says. 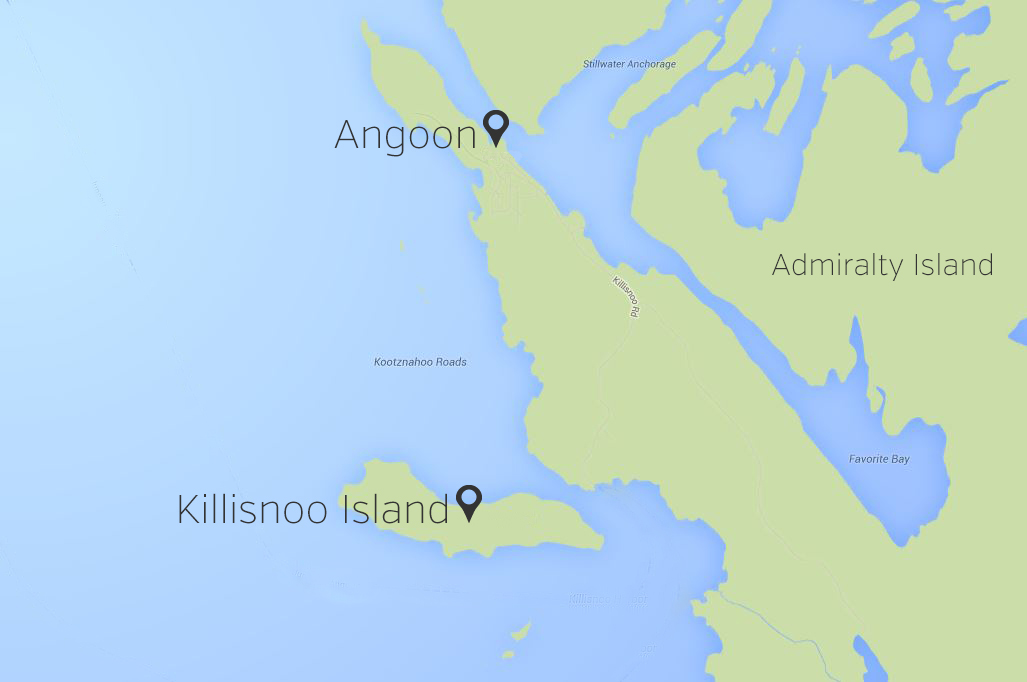 K.J. Metcalf helped start Friends of Admiralty Island in 1997 to advocate for the island’s cultural, historic and wilderness preservation. He was the first U.S. Forest Service ranger when Admiralty Island was designated a National Monument in 1978. Metcalf and his wife lived in Angoon for 18 years.

“These people were not provided any assistance at all – no medical help, no clean water, no sanitary conditions,” Metcalf says. “And the people of Angoon were incredibly important in their survival because they brought goods over and they helped take care of them.”

Dan Johnson grew up in Angoon hearing stories from his grandparents about the people of Atka and their time at Killisnoo. He says the two communities became close.

“They interacted on a daily basis so our people always talk about remembering the people that were here, and how they worked and helped each other. It wasn’t just our people helping them. It worked back and forth,” Johnson says.

While Johnson says the situation in Killisnoo was deplorable, he was told of lighter times as well.

“The happy moments, I guess, my grandparents used to talk about is that the people that were brought here loved their movies. Whenever they knew there was a new movie in town, they’d come rowing over to Angoon in their dories,” he says.

Few signs of the Killisnoo internment camp remain. The island now has a sport fishing lodge. It’s dotted with private homes, but on the south side is the cemetery where five wooden Russian Orthodox crosses mark the graves of Atka villagers.

The new memorial plaque sits atop a wooden post among the graves. It tells the story of the Atka people in Killisnoo.

When the plaque is in place, Joe Zuboff cries out a Tlingit chant. Zuboff is of the Deisheetan Clan (Raven/Beaver) of Angoon and is caretaker of the Raven House. His chant stems from the story of a crab apple tree during a big storm.

“The tide came really high and it washed this crab apple tree away and all we could do is watch this crab apple tree drift away,” Zuboff says. “And this is how we refer to our loved ones that we lose. There’s nothing we can do but watch them float into the other world.”

A history of the World War II Aleut Relocation Camps in Southeast Alaska by Charles Mobley indicates 83 people from Atka were brought to Killisnoo in 1942. Before returning to Atka three years later, 17 of them died.

Back at the cemetery, Russian Orthodox Bishop David Mahaffey of the Alaska Diocese sprinkles holy water on the memorial plaque and the area around it. He leads a blessing of the graves.

The plaque in memory of the Atka people looks east. It’s Orthodox tradition for altars and memorial graves to face the rising sun.