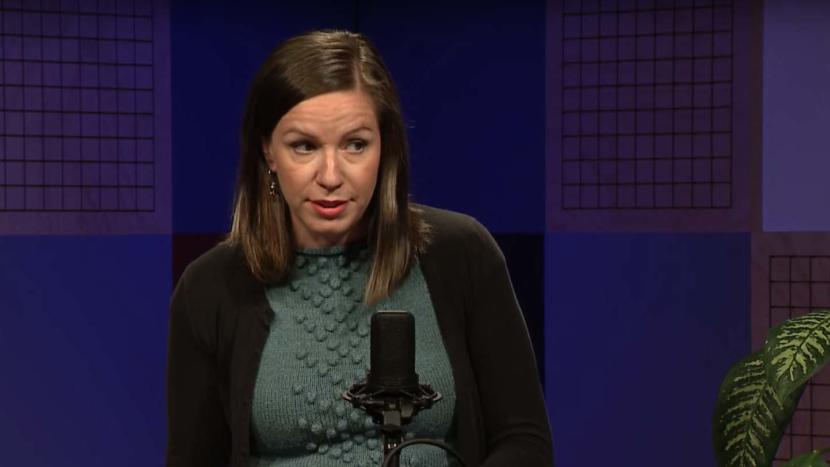 Episode of Writers’ Showcase, featuring professional actors presenting writing by Alaskans with five pieces that take us all over the state.

We go fishing with Ernestine Hayes as child on the docks of downtown Juneau, and sit by a fire with Dave Hunsaker on the Homer Spit. Each piece, in one way or another, is grounded in the experience of being in Alaska.

Christine Byl is the author of Dirt Work: An Education in the Woods, a finalist for the 2014 Willa Award in non-fiction. Her prose has appeared in Glimmer Train Stories, The Sun, Crazyhorse, and other journals. Byl earned her MFA in fiction from the University of Alaska-Anchorage and has received awards from the Alaska State Council on the Arts, Rasmuson Foundation, Breadloaf, and Fishtrap. She lives north of Denali National Park where she and her husband own and operate a trail design and construction company. She is currently at work on a novel.

Allison Holtkamp has been performing in Alaska since 2002. She studied acting at Weber State University, in Ogden, UT; and sketch comedy writing and musical improvisation at the Second City Training Center in Hollywood, CA. She has been in nine main stage productions at Juneau’s Perseverance Theatre including Leading Ladies; The Importance of Being Earnest; Bigfoot and Other Lost Souls; Oklahoma!; Seminar; Boeing! Boeing!; God of Carnage; and the role of “Velma Kelly” in Chicago. She was most recently seen as the emcee of Juneau’s Annual Wearable Art Show: Reflections.

Nancy Lord was Alaska’s Writer Laureate from 2008-10. She’s the author of several books of fiction and nonfiction, including Beluga Days and Early Warming, and the editor of the new anthology, Made of Salmon. She teaches in UAA’s MFA program and in the on-line graduate science writing program at Johns Hopkins University. “Zen Moose” is part of her essay collection Rock Water Wild: An Alaskan Life.

His graphic novel, The North End of the World (illustrated by Christopher Shy) was published by Black Watch Comics, October, 2012.  For ten years he was Artistic Director of the Juneau-based Naa Kahidi Theatre, an international touring company of Native Alaskan artists.  His play “Yup’ik Antigone” had a sold-out run in New York and twice represented the USA at festivals in Europe.  For five summers he was writer-in-residence for the Breadloaf School of English, Juneau campus.  He has written four plays for the New York-based Mettawee River Company, and has had numerous pieces staged at LaMaMa ETC, as well as other theatres in Los Angeles, San Francisco, and elsewhere.

He is a recipient of the Alaska Governor’s Award for the Arts and a Fellowship for the Arts in New York.  He received an Honorary Doctorate from the University of Alaska in May, 2014.  He is a Fellow of the Sundance Institute, a member of the Writers Guild of America and is an adopted member of the Lukaaxadi Clan of the Tlingit Nation.