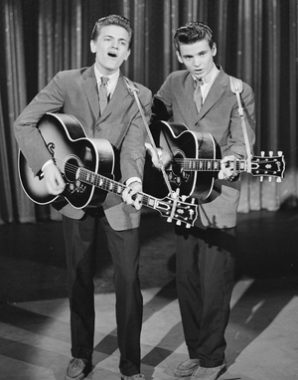 One half of one of the most influential duos in rock ‘n’ roll history has died.

–  Wednesday at 8:00 pm  –  Alaska Statehood Pioneers: In Their Own Words.   Jay Hammond was born in upstate New York in 1922 . As a young man, he studied petroleum engineering, but migraines and a football injury drove him out of college. He took up flying as a civilian, but was compelled to enlist […]

–  Wednesdays at 8:00 pm  –  This week hear about the constitutional convention, the newspaper business, Ernest Gruening, statehood and more… from George Sundborg on  Alaska Statehood Pioneers: In Their Own Words.  Repeats on Sunday at 7:00 pm.

Alaska Statehood Pioneers: In Their Own Words is a ten-part original television series of oral history documentaries.

An new 360 North series begins next Wednesday at 8:00 pm.  Alaska Statehood Pioneers: In Their Own Words is a ten-part original television series of oral history documentaries.  It was produced in collaboration with the Alaska Film Archives at the University of Alaska Fairbanks, which will house the final productions, along with the original interviews, as an educational resource.
In 2004 extensive interviews were conducted with the remaining living delegates of the Alaska Constitutional Convention, those who worked at the convention, and other notable Alaska figures. These interviews were conducted by historian Dr. Terrence Cole of the University of Alaska and public television producers in preparation of the Creating Alaska project and the upcoming celebration of the 50th anniversary of statehood. Many of these stories have never before been told. The video interviews have never been broadcast.Most have only been seen by a few people.
In these interviews, these great pioneer Alaskans tell about their contributions and involvement in forming the constitution and the state. They also tell about themselves, their families, their lives in Alaska, and the early days of Alaska as a territory and the journey to statehood. About half of the participants have passed on in the subsequent years… Judge Tom Stewart, Dr. George Rogers, Jay Hammond and Maynard Londborg.
Funding for Alaska Statehood Pioneers: In Their Own Words was made possible by support from The Alaska Committee, The Alaska Humanities Forum and the National Endowment for the Humanities.