In sworn testimony Wednesday, Alaska Rep. David Eastman said he remains a member of an anti-government militia, one of two key criteria for his disqualification from the Alaska Legislature under a 67-year-old clause of the Alaska Constitution.

Eastman, a Republican from Wasilla, confirmed his membership during the second day of a trial intended to determine whether he belongs to the Oath Keepers, a group linked to the Jan. 6, 2021, insurrection at the U.S. Capitol, and whether that group advocates the overthrow of the U.S. government by force.

If Judge Jack McKenna concludes that the answer to both questions is yes, Eastman could be disqualified from the Legislature despite his reelection in November.

McKenna must also rule on the legality of the Alaska Constitution’s disloyalty clause, which may violate the First Amendment of the U.S. Constitution. Opening Tuesday’s hearing, he asked attorneys on all sides for additional written briefing on the subject, due Monday.

Randall Kowalke, a Matanuska-Susitna Borough resident, filed suit against Eastman and the Alaska Division of Elections in July, challenging the division’s decision to certify Eastman as a candidate.

On Tuesday, Goriune Dudukgian, representing Kowalke, called Eastman to the witness stand. After presenting Eastman’s lifetime membership certificate in the Oath Keepers and other communications with members of the group, he asked Eastman, “sitting here in court today, you’re still a member of the Oath Keepers, right?”

“I believe so. I have not heard from anyone at the Oath Keepers about my membership … in several years,” Eastman said.

In response to subsequent questions, Eastman said he has not renounced his membership or withdrawn from the group.

During the trial’s first two days, Dudukgian has attempted to connect Eastman to members of the Oath Keepers who have been convicted of — or have pleaded guilty — to crimes associated with the Jan. 6 insurrection.

Attorney Joe Miller, representing Eastman, has attempted to divorce the convicted members from the rest of the group, saying they are not representative of the group as a whole, or of Eastman, who was in Washington, D.C., on Jan. 6 but did not enter the restricted area around the U.S. Capitol.

Eastman has not been convicted or even accused of a crime, but Alaska’s constitutional disloyalty clause doesn’t require criminality: It only requires that someone belong to or aid an organization that advocates the overthrow of the U.S. government by force or violence.

Jon Lewis, a research fellow at the Program on Extremism at George Washington University, said Tuesday during testimony that it is not uncommon for a group to have a small core membership backed by a larger pool of members who contribute financial or logistical support.

“I think it is important to recognize that it is not uncommon for small subsets of these groups, typically the most active, most willing individuals to be the ones who actually mobilize a much larger support base — whether it’s financial or ideological — behind them,” he said.

Dudukgian relied on testimony from Lewis and Matt Kriner, a senior research scholar at the Center on Terrorism, Extremism, and Counterterrorism at the Middlebury Institute of International Studies at Monterrey, to make the case that the actions of Jan. 6 show that the Oath Keepers advocate the overthrow of the U.S. government.

“My expert opinion is that the Oath Keepers have consistently displayed and spoken to a desire to see the U.S. government — in certain conditions — removed, with the goal of having their personal political views replace the system that is currently in place,” Kriner said.

Miller, defending Eastman, is expected to make his opening remarks on Thursday as the plaintiffs rest their case and the defense takes over.

According to preliminary witness lists, Miller intends to call several members of the Oath Keepers to testify, but he said Wednesday that may be difficult, because many are in prison. 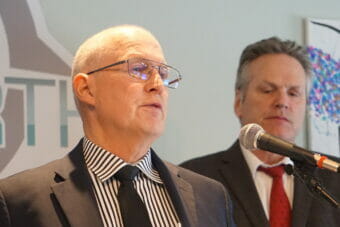 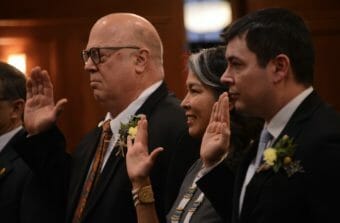