The family of a man killed by a guard on a military base in Kodiak is still looking for answers more than two years after his death. The Navy SEALs have a video of the shooting, but they have stonewalled the family’s requests to see it. So now, the family says, its only hope is a federal lawsuit.

In the spring of 2020, Tony Furio was driving out to gather firewood in Chiniak, near where the road ends on Kodiak Island. Furio and his son, Jayson Vinberg, loaded up the truck with sandwiches and a big bag of potato chips in case they got hungry on the way.

“I can remember on the way back he started laughing, and I’m going, ‘What are you laughing about?’ And he said, ‘Well, here, Dad, you better have some of these before I finish the whole bag.’ It was just a fun time,” said Furio.

On a warm June night, the 30-year-old man wandered onto Kodiak’s Naval Special Warfare Detachment — it’s known as the SEAL base to locals.

According to investigators, Vinberg was carrying a pair of kitchen knives. He tapped them on the glass of the guard house, where a lone watchman was stationed. The report says the guard repeatedly ordered Vinberg to leave. Vinberg started to walk away. Then, still carrying the knives, he turned around and walked toward the guard, who opened fire, killing him. A blood test later showed Vinberg had been drinking — he had a blood alcohol level of .11 — and also had marijuana in his system.

Back in January of this year, a joint state and federal criminal investigation concluded that Vinberg’s killing was justifiable, because the guard acted in self-defense.

But Vinberg’s family still has questions. The military has told them almost nothing. It made them file a Freedom of Information Act request just to see the results of the investigation. And even then, it has refused to show them the surveillance video that captured the final moments of their son’s life.

“I mean we have a peace in many ways, but not necessarily a peace about the circumstances that happened,” said Esther Furio, Vinberg’s stepmother.

What happened that night in June is at the center of a lawsuit Vinberg’s widow, Becky Vinberg, filed this summer against the U.S. government. She declined to be interviewed. The Furios are not listed plaintiffs, but say they support the suit.

The original complaint named the United States, U.S. Navy and the petty officer who shot Vinberg, Bradley Udell, for wrongful death and negligence in his killing. The latter two were dismissed as defendants, but a judge ruled last month that the lawsuit against the U.S. could proceed, noting that the United States “has not been forthcoming with what only it knows about the circumstances surrounding the shooting.”

The U.S. Attorney’s office declined to comment on the lawsuit.

Tony Furio said the lack of transparency has been painful.

“When you think that you’ve almost got it, it’s not true because that finality is not there,” he said. “It’s just hard, that’s all.”

In July, Naval Criminal Investigative Service, or NCIS, released hundreds of pages of material in response to FOIAs filed by KMXT, CoastAlaska and Vinberg’s family.

But the report is heavily redacted — all the names are blacked out, and in some places, it’s hard to understand what it even says. And while surveillance video footage of the incident is repeatedly referenced in NCIS’s report, the military so far has refused to release it to KMXT or the family. It says after 9 months, the video remains under review.

KMXT filed another FOIA request for the video in September, this time with Naval Special Warfare Command. Alaska State Troopers have also declined to release the tape or additional material regarding the case, deferring to the level of redactions placed on the full report by federal investigators.

That’s not normal. These days, when a government employee kills someone in the line of duty — and it’s captured on video — the authorities almost always release it.

Rich Curtner is a longtime public defense attorney in Alaska with experience representing people who have been shot by police officers. He’s not involved with Vinberg’s case, but he said releasing body camera footage or surveillance video when it’s available has become an important protocol for departments across the country.

“And when an incident is recorded, that it can be made public in a timely fashion — not two years, three years, or a whole process of going through the records,” said Curtner. “It should be publicly released as soon as possible.”

Curtner points to cases like the 2019 fatal shooting of Bishar Hassan by Anchorage police officers as one instance where seeing what happened changed the perspective of the shooting.

In Hassan’s case, dashcam video showed officers almost immediately opening fire after he pulled what was later determined to be a BB gun from his waistband. And minutes went by before anyone applied first aid after he was struck by multiple rounds. The footage also was not made immediately available to the family or the public.

Curtner said making information accessible to the public can also corroborate a department’s telling of events and whether an officer’s action were warranted.

“You can’t distinguish between an overreaction or a belligerent, dangerous person unless you see the video,” he said. “Then you know what that person was acting like.”

Page after page of NCIS’s report into Vinberg’s death includes interviews with his family, friends, coworkers — even some people who didn’t like him. There’s information about past legal dust-ups and drug use, mostly from when he was younger.

Tony Furio said his son wasn’t perfect, but in all the questions investigators have asked about him, the family hasn’t been able to ask their own questions about what happened to him.

Esther Furio said the process is one that no family should have to go through.

“Anytime you lose someone really close to you it’s not like, ‘Okay, finally it’s over,’” she said. “It’s always there, there’s always the memories, the pain and those things too. But when it goes on for this long, it’s like you couldn’t really grieve because there’s no ending to it.”

This year, on the second anniversary of the shooting, the Furios went to Kodiak’s Fort Abercrombie State Park. Esther Furio had made a floating flower arrangement, and together they placed it in the water at the bottom of the park’s rocky cliffs.

Tony Furio said he likes to talk to his son at Abercrombie, and he’s tried to find peace where he can. He’s said two prayers since the night he learned his son had died — one for forgiveness for the guard who shot his son and the guard’s family.

“Not that they had any part of it, but that their lives, our lives, everyone who’s connected to Jayson is changed,” said Furio. “And for God’s truth to be known in the end.”

More than two years later he said he’s still waiting for that prayer to be answered.

Editor’s note: This story was produced as a collaboration between American Public Media and KMXT. 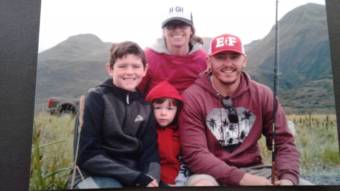 The family says they're willing to accept the truth, however unpleasant — but they want to know what happened that night.