Firefighters in Girdwood rescued a worker who got stuck in mud along Turnagain Arm Thursday, briefly closing the Seward Highway and offering a reminder of the mudflats’ danger.

Girdwood Fire Chief Michelle Weston said the surveyor became stuck in the mud in the Tidewater Slough, just north of town. He used his cellphone to call 911 around 10 a.m., sinking deeper by the time crews arrived.

“The individual was stuck in mud up to his waist with about 3 inches of water above that waistband,” Weston said.

Anchorage police closed the highway in both directions near Mile 90 as rescue crews worked to extricate the man.

The mudflats along Turnagain Arm are known for patches of mud that can entrap people like quicksand in the rising tidewaters. Writer MaryJo Comins shared a 2012 account of being trapped in the mud at the age of 10, losing her boots to it as she escaped.

Girdwood firefighters regularly receive calls for rescues from the mudflats, Weston said. Twenty years ago, the department developed a custom tool that sprays water from fire trucks directly into the mud around a trapped victim. A rescuer stands on backboards laid on the mud around the victim during the procedure.

“The person will work the mud rescue tool around the patient to free the patient,” Weston said. “And when this is happening, it’s also important for the individual to also work to try and get their legs free.”

Weston credited firefighter Stuart Parry, a longtime river and snowmachining guide and “great backcountry guy,” with rescuing the surveyor on Thursday. By 11:30 a.m. the man was freed from the mud. He declined medical attention, Weston said. The highway was reopened soon afterward.

Firefighters urge people recreating or working in the area to be wary of the mud.

“Where you might be one moment standing on one part that’s good, one part might not — the next part of the soil might not be good,” Weston said.

Cellphone reception along Turnagain Arm can also be spotty, she said. That means people should travel together, so others can summon help if someone gets stuck.

AN SOS message from the snowmachiners said they were out of fuel and not dressed for the weather and that one of them was going into hypothermic shock. 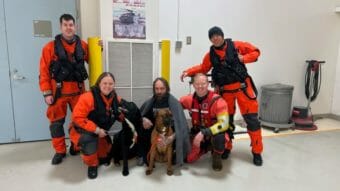