Now is the time to get flower bulbs in the ground before it freezes. For an impressive display of blooms in the spring, plant a lot of them.

Master Gardener Ed Buyarski recommends planting flower bulbs such as crocuses, daffodils, and tulips in a location with good drainage. They don’t need to be in full sun all year long, just in the spring.

“So we can plant them at the edge underneath deciduous trees, which will leaf out in late May and June,” Buyarski says.

Buyarski plants bulbs by the bucketful in the fall. He digs large six-inch deep holes or trenches that wind around his raised beds, scratches in fertilizer, and places bulbs in groups of five to ten. “The mantra is pointy-end up,” he says.

Buyarski suggests packing them in and planning for just one season of blooms.

“With tulips, we’re often treating them like annuals, just because the second year they don’t come back very well. And the third year just leaves.” he says. “You can plant them just about touching, four- or five-hundred bulbs, a spectacular show of color.”

If the goal is a spring cutting garden, productivity of bulbs can be extended by strategically planting mid-season and late-season blooming daffodils and tulips varieties in the fall.

“You can have six weeks of cut flowers from that little patch of ground in front of your house.” Buyarski says.

After the daffodil and tulip bulbs are in the ground, he covers them up halfway. “So now you’ve got a three-inch-deep hole,” he says. “You can plant some short bulbs, like crocus and snowdrops and Blue Scylla.”

Although spring is half a year away, planting bulbs now is not only easier before the ground freezes, it also gives gardeners something to look forward to.

“You know, at this time we’re dreaming. We’re hoping and we’re planning all this stuff for six months from now.” Buyarski says. “And you know, we gardeners are an optimistic bunch.” 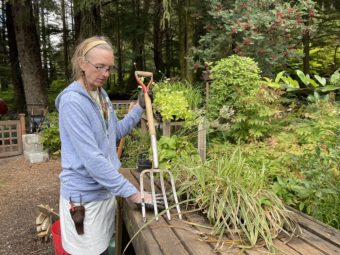 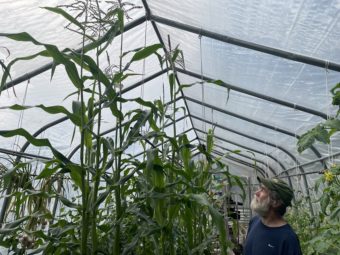