Signs of the flood are everywhere. Seaweed and debris hang shoulder high off fences in the middle of town. A steel culvert rests on top of a building got pushed off its frame. Fishing boats lie stranded on the tundra.

Parts of Hooper Bay were without power for about 36 hours over the weekend as a storm surge flooded the coastal community of about 1,300 people. But the situation could have been far worse — and threatened the town’s winter subsistence stock — if not for the work of two local power plant operators.

On Sept. 20, at the airstrip, cousins Leemon Andrew and Leemon Bunyan were working to restore power to the airstrip’s lights.

Andrew, the older of the two cousins, said things are still in a much better shape than just a few days ago.

“Everybody’s happy that they have power,” Andrew said.

Andrew, born and raised in Hooper Bay, said he had never seen anything like the flooding that rocked the village over the weekend. He only just started his job as an Alaska Village Electric Co-op power plant operator in April. His cousin, Bunyan, has only been working as a plant operator for three weeks. Both are in their early 30’s.

The past few days have been about as intense of an initiation into the job as anyone could imagine.

When the water started to rise up to the bulk fuel tanks and the power plant on Friday night, Leemon Andrew and Leemon Bunyan were there with an AVEC contractor.

Soon, some of the empty bulk fuel tanks started to lift and tilt. One toppled over completely. The falling tank caused the gaskets of the fuel lines to rupture. Those lines bring fuel from the bulk tanks to a smaller tank that powers the generator, which in turn powers the whole town. Now that power was close to shutting off completely.

They needed to figure out a solution.

“We had a bucket brigade going to fill up the day tank so the generator wouldn’t run out of fuel,” Andrew said. “After the flood in the morning, the day tank was getting low.”

Without a functioning fuel line, Andrew, Bunyan and the AVEC contractor became a human fuel line instead. As the water rose up toward their waists, debris floating around them, they started carrying bucket after bucket of fuel to the day tank.

If the generator shut down, the whole town would lose power. Everyone’s freezers are filled with moose meat and fish for the winter. Without power, Leemon Andrew said the freezers risked thawing and spoiling all the food inside. It was more than electricity — it was a matter of food security.

As the team worked, Robert Lohman, the AVEC contractor, kept an eye on the rising waters pummeling the bulk fuel tanks. With the water around his waist, he started unlocking the gates further up the hill, creating an escape route for the crew in case they needed to abandon the plant.

I asked Lohman if he was worried for his life.

Eventually the group came up with a workaround for the bucket brigade. They ran a garden hose from the valve at the bottom of the tank to a pump, then ran another garden hose from that pump to the tank feeding the town’s generator. That MacGyvered solution is still powering the village.

AVEC leadership visited the power plant on Wednesday to look for a more permanent solution. 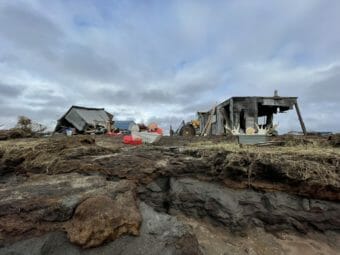 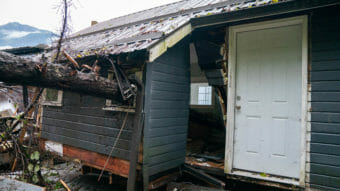 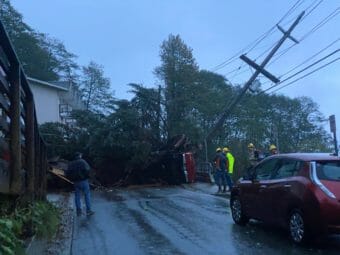