COVID-positive travelers say they were not allowed to board their cruise ship in Skagway this week. Instead, they say that Holland America helped them book travel on a state ferry and then an Alaska Airlines flight out of Juneau — the day after their positive tests.

Diana and Larry Lehrer were supposed to set sail from Skagway on Holland America’s Koningsdam after a bus tour through the Interior and Canada. But they tested positive for COVID-19 when they reached Skagway on Tuesday.

“The first test went fine and the second one didn’t,” said Diana Lehrer.

The next day the couple was on the state ferry, sitting masked near the front windows. The MV LeConte was packed with passengers from Skagway and Haines headed to Juneau.

“They wouldn’t let us on the cruise ship because that’s asking for trouble, so they gave us the option of quarantining here in Skagway or going home,” Diana said.

Diana said she was aware when she booked the package that if she or her husband tested positive during the bus trip, they wouldn’t be allowed on the cruise ship.

“We knew it could happen, but we didn’t think it would happen to us,” she said.

She said Holland America took care of them after they tested positive. The company paid for their hotel and delivered meals to their room.

“They walk you through everything,” she said. “They totally rebooked our travel back. They made it very easy.”

A Holland America spokesperson said that’s not the company’s policy. It will only help customers reschedule travel after they quarantine for five days.

But Mr. Lehrer later confirmed in an email that after one night in isolation in Skagway, a Holland employee did book their travel. He wrote: “We only had to make one phone call to Holland America’s scheduling phone number and they did their magic in less than ten minutes.”

Skagway Mayor Andrew Cremata says ferry or plane travel out of Skagway for travelers with active COVID-19 cases is not part of the municipality’s port agreement with Holland America.

“I know that that happens,” said Cremata.

You don’t have to test negative to board one of the state’s ferries or Alaska Airlines flights, but they both have a policy that you should not travel if you are sick.

Laura Bronk and her husband were on the same tour as the Lehrers — then they were on the LeConte, too, after a positive test. Bronk said their tour guide recommended the ferry over a small plane out of town.

She says the cruise company offered them five nights in isolation in Skagway, but they decided to get on the ferry instead. She said Holland was going to reimburse them for the ferry ticket.

“Your vacation’s over, you might as well go home,” Bronk said.

As for the Lehrers, the couple plans to catch flights from Juneau home to the East Coast. They say their symptoms are mild — a runny nose and a little bit of a cold. 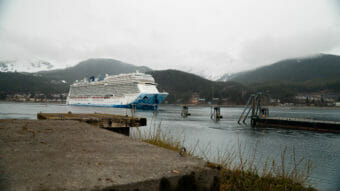 The CDC has ended its COVID-19 program for cruise ships

On its website, the CDC now says cruise travelers can contact their cruise lines directly about outbreaks during their trips. 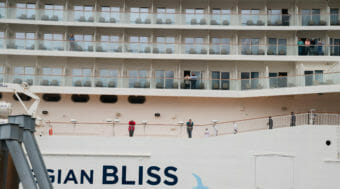 Some passengers want the public to know that lots of people are getting infected during cruises, and they’re left in the dark about outbreaks on board. 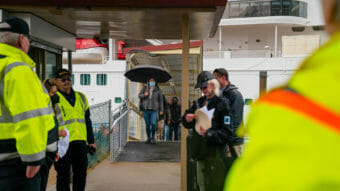 Cruise ships report a lot of COVID data to the authorities, but very little of the information is public

Most cruise ships participating in the CDC's COVID cruise ship program are in the orange category. That could mean a handful of people are sick, or hundreds.