Kara Willis and her husband Tyler used to spend evenings at the Mendenhall Glacier a decade ago, when they worked summers in Juneau.

They live in Wyoming now, but they were visiting in July and reliving old memories at the glacier when they found a water bottle on the shore of the lake.

“It was just floating in the water, and we’re like, ‘Oh, there’s garbage,’” Kara said. “But then — there’s something in it.”

Tyler opened the bottle. Inside were 11 notes written by kids back in 2006.

“When we saw children’s handwriting and the date, the year 2006 over and over, and the sweet little facts about the kids, it was just — it was so special,” Kara said.

Written on each card is a first name, the year 2006 and what appear to be facts about the kids or memories they have from their first 9 or so years on Earth.

One, written by a child named Gabriella, reads, “I was born in nineteen ninety nine. I can ski and clime [sic].”

Zori Oberle wrote, “getting an IV in my head.”

Oberle is 25 years old now, lives in Salt Lake City and works in the biotech industry.

“I unfortunately do not remember anything about this,” Oberle said. “Several people messaged me, and like, ‘Oh, is this you?’ And I was like, ‘No way! That is me!’”

She says the I.V in her head was a dehydration treatment she got as a small child after she was adopted from China by a couple who still live in Juneau.

If Oberle were to write a note in a time capsule now, she would tell her future self what to do.

“Just stay scheming for adventure, and maybe I guess travel to China. And three: learn to surf,” she said.

After finding the time capsule, the Willises handed it over to staff at the Mendenhall Glacier Visitor Center, where it’s being kept. Tyler speculated that someone in the group threw the bottle onto the glacier itself and that it later floated out to the lake with meltwater.

Julia Spofford, an assistant director for the center, also wonders if it was tossed onto the ice. 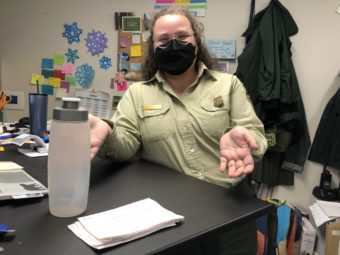 “It was quite soggy when I got it. But luckily, it’s in pretty good condition, so you’re able to still read everything,” Spofford said.

She encourages people to avoid leaving a trace in the future and to instead bury their time capsules at home.

“We do want to make sure there’s good messaging about leaving a trace,” Spofford. “And while we’d love finding things like this, at the glacier that you know these moments of history, we hope to not find too many more.”

For their part, the Willises are glad to have found it. They’re both teachers, with a 9-year-old of their own. They say they feel invested.

“We were thrilled, and we thought, ‘We have to keep this safe. We have to find out the story,’” Kara said.