Soon-to-be seven-year-old Isa Santiago splashed through a tide pool at Bishop’s Beach Friday morning. She shrieked excitedly when she spotted a dark pink sea star glued to the rocks, surrounded by dark gray and green stars.

Isa and her family made the four-and-a-half-hour drive from their home in Eagle River to tidepool during one of the lowest tides of the year in Homer. Her mom, Kyra Santiago, said she started planning the trip nine months ago.

“I looked at tide charts months in advance to be able to book Airbnb [and] make sure we got here on the lowest tide possible of the season,” she said.

Friday’s tide was especially low, at –5.3 feet, only topped by a low of -5.6 in June. Homer only sees tides this low a few times a year.

Biologists like Katey Shedden say it’s a great time to see critters who live at the bottom of the ocean, where they might normally be hidden under 25 feet of water.

Shedden is an environmental educator at the Alaska Maritime National Wildlife Refuge, which put on last week’s tidepooling events.

On Friday, she led a group of bundled up kids and adults along the long, sandy beach to the intertidal zone — where the sand meets the sea — to look for critters.

The first lesson: Be aware of where you’re going and respect the fragile ecosystem.

The colorful starfish and anemones were the biggest hits Friday. One member of the group said they even spotted an octopus.

Chad and Pam Landes were visiting from Topeka, Kansas. Friday was their first time tidepooling.

The couple was sloshing through the tide pools in tennis shoes — feet wet, but faces sporting big grins.

Chad said he liked the starfish, but didn’t want to touch any of them.

Pam, on the other hand, snapped photos of starfish and picked one up, using what Shedden called the “three-finger technique.” With her thumb, pointer and middle finger, Pam gently grabbed a star and tried to lift it from the sand.

The star resisted, she left it alone. But its neighbor was less resistant, gently releasing from the seafloor when Pam bent to pick it up.

“I’ve only seen them in aquariums,” Pam said. “To actually be walking out here and seeing it firsthand and exploring this whole area is just amazing. It’s so much fun.”

Payton Tobin, a Youth Conservation Corps member, is interning with the Wildlife Refuge for the summer. He tagged along with the visitors, pointing out various sea critters and listing off facts about them.

“I’ve just been helping look around, see if I can find anything interesting to show the people, answering any questions they may have and giving some fun information about the critters,” he said.

Tobin’s studying computers at the University of Alaska Fairbanks. But he has tidepooling in his blood: his mom, Debbie Boege-Tobin, is the marine biology professor at the college in Homer.

His favorite, like many of the other adults at the event, was the somewhat rare six-rayed sea star. He said sea stars are fascinating because they can regenerate their arms and grow back from almost nothing after being attacked by a predator.

But Shedden, the environmental educator leading the outing, said while sea stars are cool, don’t overlook the barnacles.

“They’re so hardcore,” she said. “They are the toughest of the critters and they’re everywhere. “

For the first part of their lifecycles, she said, barnacles float through the water, looking for spots to anchor down. When they do, they hunker down in their little shells and send their feet out to collect food.

Barnacles are usually hidden beneath the sea in the intertidal zone or found covering rocks, pilings and buoys. Shedden said when the tide pulls back, tidepooling is a great chance to explore and see them up close.

“They’re so cool. I’m stoked on barnacles,” she said.

For Isa Santiago and her 13-year-old brother Lucas, Friday was all about another critter altogether. Isa said she liked the pink starfish – pink is her favorite color – but it was the anemones that felt like “gooey soap” that caught her attention.

“They’re like a big blob – or they could be small – with tentacles coming out of the top,” he said. “Sometimes, when you poke the base of it, the tentacles go back inside. But if you touch the tentacles part, you may feel a little suction, because it sticks on to you.”

Lucas said he thinks it’s “pretty cool” that when a little fish or other creature swims through the water next to an anemone, the anemone will shock it, pull it in and eat it. He said he definitely wants to go tidepooling again.

And that’s exactly what Kyra Santiago, Lucas’ mom, hoped her kids would say.

“This is great to be able to just see living creatures in their own habitat and learn the etiquette of how to treat the sea and [about] conservation efforts,” she said. “These are all the kinds of things I want our kids to be able to grow up with and see.” 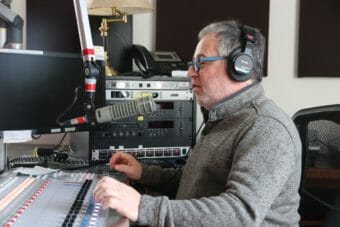 Meet the Sitkan behind the 'crappy clarinet playing' of Squidward Tentacles

The musical genius of Squidward can be traced back to one person — now a therapist — who lives in Sitka.